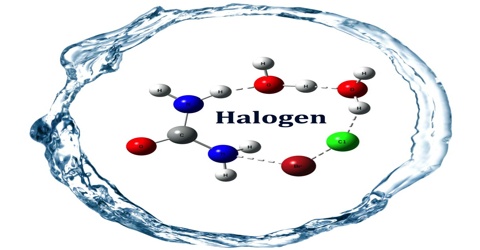 Halogens (or halogen elements) are any of a group of five nonmetallic elements with similar properties. The halogens are fluorine, chlorine, bromine, iodine, and astatine. The artificially created element 117 (tennessine, Ts) may also be a halogen. In the modern IUPAC nomenclature, this group is known as group 17. The symbol X is often used generically to refer to any halogen. The term “halogen” means “salt-former” and compounds containing halogens are called “salts”. All halogens have 7 electrons in their outer shells, giving them an oxidation number of -1.

All of the halogens form acids when bonded to hydrogen. Most halogens are typically produced from minerals or salts. The middle halogen, that is chlorine, bromine and iodine, are often used as disinfectants. Organobromides are the most important class of flame retardants. Elemental halogens are dangerously to potentially lethally toxic.

The percentages of the halogens in the igneous rocks of Earth’s crust are 0.06 fluorine, 0.031 chlorine, 0.00016 bromine, and 0.00003 iodine. Astatine and tennessine do not occur in nature, because they consist of only short-lived radioactive isotopes. Properties and Applications of Halogen

Halogens show great resemblances to one another in their general chemical behaviour and in the properties of their compounds with other elements. Halogens are nonmetals in group 17 (or VII) of the periodic table. Down the group, atom size increases. As a diatomic molecule, fluorine has the weakest bond due to repulsion between electrons of the small atoms. Probably the most important generalization that can be made about the halogen elements is that they are all oxidizing agents; i.e., they raise the oxidation state, or oxidation number, of other elements a property that used to be equated with combination with oxygen but that is now interpreted in terms of transfer of electrons from one atom to another.

Fluoride can be found in many everyday products, including toothpaste, vitamin supplements, baby formulas, and even public water. However, overconsumption of fluoride can be fatal.

Chlorine accounts for about 0.15 percent of human body weight and plays several important roles in the body’s functioning. Compounds of both chlorine and bromine are used as disinfectants for sterilization.

Iodine is essential for the functioning of the body’s thyroid gland. Without iodine, thyroid hormones cannot be produced, which leads to hypothyroidism.

Drug candidates that have incorporated halogen atoms are usually more lipophilic and less water-soluble than their analogues, and so have improved penetration through lipid membranes and tissues. Because of this, some halogenated drugs can accumulate in adipose tissue. Polyhalogenated compounds (PHCs) are highly reactive and also bioaccumulate in humans; some of them have toxic and carcinogenic properties. PHCs are used in a vast array of manufactured products and in pest control.

Halogen lamps are a type of incandescent lamp using a tungsten filament in bulbs that have small amounts of a halogen, such as iodine or bromine added. The chemical reactivity of halogen atoms depends on both their point of attachment to the lead and the nature of the halogen. Aromatic halogen groups are far less reactive than aliphatic halogen groups, which can exhibit considerable chemical reactivity.