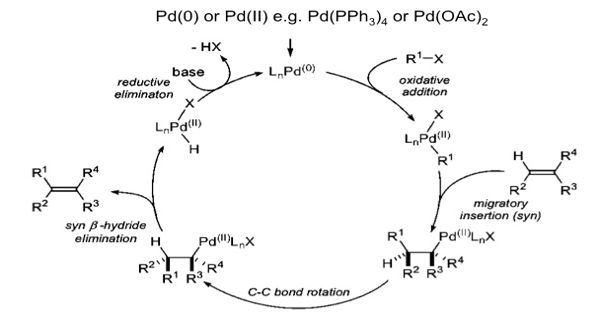 The Heck reactions are the reactions of aryl halides with alkenes in the presence of palladium catalysts and are the most industrially utilized reactions. It is considered to be one of the more useful strategies in organic synthesis for the construction of carbon-carbon bonds.

The Heck reaction is a famous chemical reaction discovered by Mizoroki and Heck in 1972 through independent research. It is named after Tsutomu Mizoroki and Richard F. Heck. Heck was awarded the 2010 Nobel Prize in Chemistry, which he shared with Ei-ichi Negishi and Akira Suzuki, for the discovery and development of this reaction. It is described as a vinylation or arylation of olefins where a large variety of olefins can be used, like derivatives of acrylates, styrenes, or intramolecular double bonds. 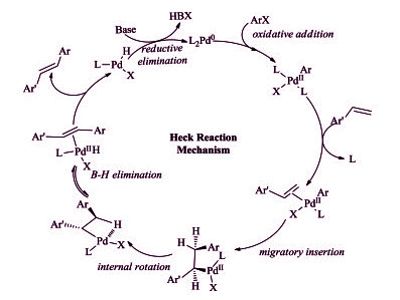 The Heck reaction proceeds under relatively mild conditions tolerate a variety of functional groups such as aldehydes, amines, esters, and nitro groups, and often affords high yields of desired products. The reaction yields a substituted alkene and is considered to be a coupling reaction. It remains one of the most widely used Pd-catalyzed methodologies in synthesis and catalyst discovery and optimization. One of the major limitations of the Heck reaction is the precipitation of Pd metal, which results in catalyst deactivation.