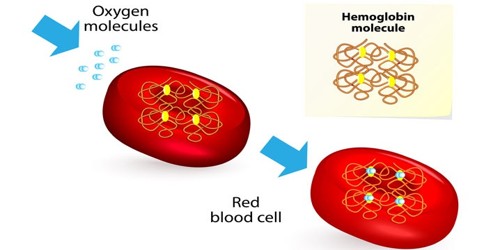 Hemoglobin is involved in the transport of other gases. It is a protein in our red blood cells that carries oxygen to our body’s organs and tissues and transports carbon dioxide from our organs and tissues back to our lungs. Every one of the body’s billions of cells needs oxygen to repair and maintain itself.

It carries some of the body’s respiratory carbon dioxide (about 20-25% of the total). 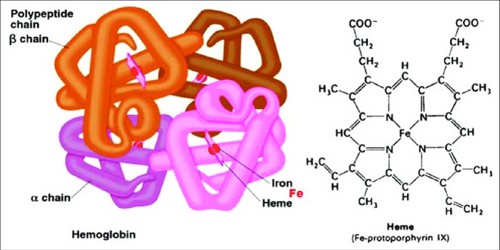 Hemoglobin is a protein in red blood cells that are made up of four chains. The most common type of hemoglobin in mammals contains four such subunits. Each subunit of hemoglobin is a globular protein (globin) with a heme group inside it. Each heme group has one iron atom. This binds one oxygen molecule. So the complete hemoglobin molecule has four globin chains, four heme molecules, and four iron atoms. Each of these chains contains a compound known as heme, which in turn contains iron, which is what transports oxygen in the bloodstream. When hemoglobin is in the lungs, it picks up oxygen in its hemes and carries it to the rest of the body.

Its structure took years to work out. Max Perutz and John Kendrew worked out the structure of myoglobin first. That muscle globin is smaller, with only one heme group.