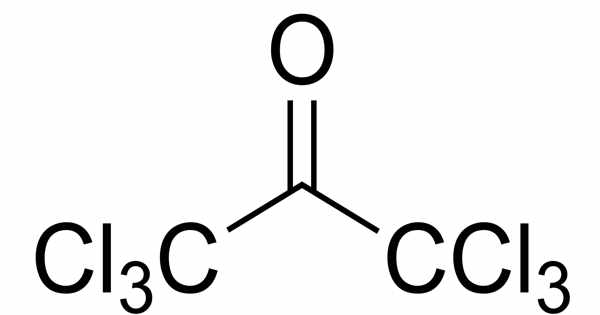 The organic compound hexachloroacetone has the formula (Cl3C)2CO. It has a distinct, slightly pungent odor and is clear, colorless to yellowish liquid. Hexachloropropanone and perchloroacetone are other names for it. It is an organic compound that is primarily used as a pesticide. Numbers indicating the position of the chlorine atoms are generally omitted because chlorine is substituted in all possible positions. It is a colorless liquid that is only slightly soluble in water. Hexachloroacetone is primarily used as a pesticide.

Hexachloroacetone appears as a yellow-colored liquid. Slightly soluble in water and denser than water. Vapors are much heavier than air.

It is a type of halogenated ketone. Ketones react with a wide range of acids and bases, releasing heat and flammable gases (e.g., H2). The heat may be enough to start a fire in the unreacted portion of the ketone. Ketones produce flammable gas (H2) and heat when they react with reducing agents such as hydrides, alkali metals, and nitrides. Isocyanates, aldehydes, cyanides, peroxides, and anhydrides are incompatible with ketones. They have a strong reaction with aldehydes, HNO3, HNO3 + H2O2, and HClO4.

In the solid and liquid states, the dielectric constants of hexafluoro- and hexachloroacetone are measured. In the liquid state, they have a negligible association. Hexafluoroacetone has dipole moments of 0.648 D in the gaseous state and 0.63 D in pure liquid, and hexachloroacetone have dipole moments of 1.24 D in carbon tetrachloride solution and 1.34 D in pure liquid.

Hexachloroacetone exposures are irritated skin and eyes. Contact with molten substances may cause severe burns to the skin and eyes. It may be toxic by ingestion or inhalation. It used to make other chemicals.