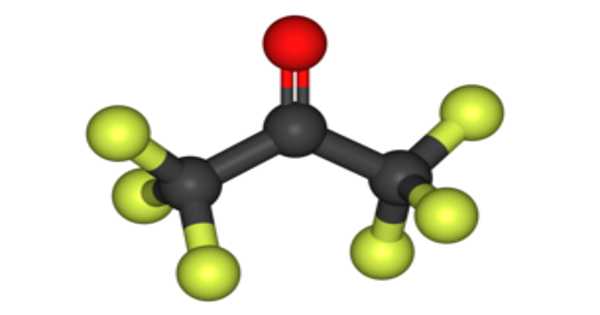 The chemical compound hexafluoroacetone (HFA) has the formula (CF3)2CO. It is a colorless gas that is toxic and highly reactive. It is structurally similar to acetone, but its reactivity is significantly different. It is likely to produce a significant amount of vapor at room temperature. It is a colorless, hygroscopic, nonflammable, highly reactive gas with a musty odor. It is a compound with a similar structure to acetone but a significantly different reactivity, most commonly as a sesquihydrate.

It is an acetone ketone in which all of the methyl hydrogens have been replaced by fluoro groups. It is a perfluorinated compound and a ketone. The most common form of this substance is hexafluoroacetone sesquihydrate (1.5 H2O), which is a hemihydrate of the geminal diol hexafluoropropane-2,2-diol (F3C)2C(OH)2.

HFA is a highly reactive compound that reacts vigorously with water, producing a series of hydrates (sesquihydrate, monohydrate, and dihydrate) and eventually a stable trihydrate. The industrial route to HFA entails treating hexachloroacetone with HF as follows:

HFA is formed by the rearrangement of hexafluoropropylene oxide. HFA can be synthesized in the laboratory in two steps from perfluoropropene. KF catalyzes the reaction of the alkene with elemental sulfur in the first step to produce 1,3-dithietane [(CF3)2CS]2. Iodate then oxidizes this species to give (CF3)2CO.

It is also used as a precursor to hexafluoroisobutylene, a monomer used in polymer chemistry, and as a building blocks in the synthesis of midaflur, bisphenol AF, 4,4′-(hexafluoroisopropylidene)diphthalic anhydride, and alitame.

It is toxic by ingestion, skin absorption, and inhalation and is an irritant to the skin, eyes, and mucous membranes. It emits toxic fluoride fumes when heated to high temperatures. Prolonged exposure to fire or intense heat may cause the container to violently rupture and rocket. It’s used in the manufacture of other chemicals.