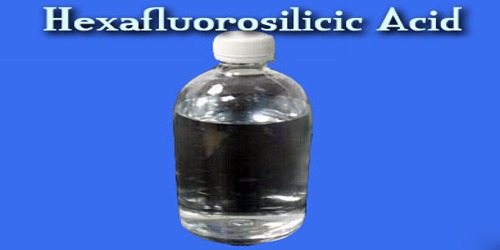 Hexafluorosilicic acid is a substance that yields hydrogen ions in solution and from which hydrogen may be displaced by a metal to form a salt. For the various acids, see under the specific name, such as acetic acid. All acids react with bases to form salts and water (neutralization). Other properties of acids include a sour taste and the ability to cause certain dyes to undergo a color change. A common example of this is the ability of acids to change litmus paper from blue to red. It is produced naturally on a large scale in volcanoes. It is manufactured as a precursor to aluminum trifluoride and synthetic cryolite. It is commonly used as a source of fluoride for water fluoridation. Salts derived from hexafluorosilicic acid are called hexafluorosilicates. This acid is also converted to a variety of useful hexafluorosilicate salts. The potassium salt is used in the production of porcelains, the magnesium salt for hardened concretes and as an insecticide, and the barium salts for phosphors.

Production and Structure of Hexafluorosilicic acid

Hydrofluorosilicic acid manufacture can be viewed as a two-step process, although in reality it is carried out in four steps to ensure that the right concentration of acid is obtained.

The superphosphate production process results in the evolution of carbon dioxide, steam and SiF4. This SiF4 is an environmental pollutant and so is removed from the gas stream and used to produce fluorosilicic acid.

The SiF4 is removed from the gas stream by contacting the gas with water droplets. This water hydrolyses the SiF4 as follows: