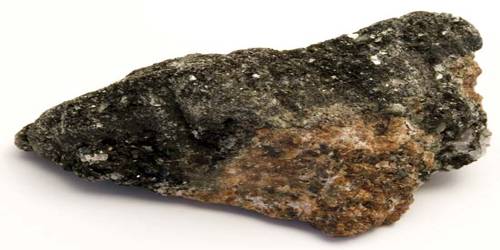 Hornblende is a complex inosilicate series of minerals. It is an important constituent in acidic and intermediate igneous rocks such as granite, diorite, syenite, andesite, and rhyolite. It is not a recognized mineral in its own right, but the name is used as a general or field term, to refer to a dark amphibole. Hornblende has a hardness of 5–6, a specific gravity of 2.9–3.4 and is typically an opaque green, greenish-brown, brown or black color. Its cleavage angles are at 56 and 124 degrees. It is most often confused with various pyroxene minerals and biotite mica, which are black and can be found in granite and in charnockite.

Hornblende is a common constituent of many igneous and metamorphic rocks such as granite, syenite, diorite, gabbro, basalt, andesite, gneiss, and schist.

It is the principal mineral of amphibolites. Very dark brown to black hornblendes that contain titanium are ordinarily called basaltic hornblende, from the fact that they are usually a constituent of basalt and related rocks. Hornblende alters easily to chlorite and epidote.

A rare variety of hornblende contains less than 5% of iron oxide, is gray to white in color, and named edenite, from its locality in Edenville, Orange County, New York.

Other minerals in the hornblende series include pargasite, hastingsite, and tschermakite.

The mineral hornblende has very few uses. Its primary use might be as a mineral specimen. However, hornblende is the most abundant mineral in a rock known as amphibolite which has a large number of uses. It is crushed and used for highway construction and as railroad ballast. It is cut to use as dimension stone. The highest quality pieces are cut, polished, and sold under the name “black granite” for use as building facing, floor tiles, countertops, and other architectural uses.