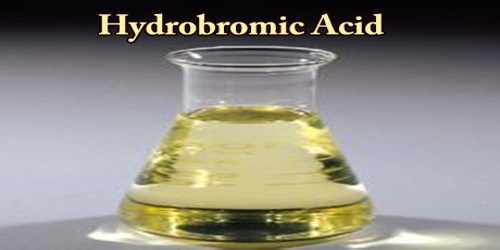 Hydrobromic acid can be prepared in the laboratory via the reaction of Br2, SO2, and water.

More typically laboratory preparations involve the production of anhydrous HBr, which is then dissolved in water.

Hydrobromic acid actually used to make other chemicals and as a catalyst in the manufacture of chemicals. However, it can also be produced electrolytically. It can also be prepared by treating bromides with non-oxidizing acids like phosphoric or acetic acids. It reacts with propene undergoes addition reaction resulting in the formation of 2-Bromopropane. The chemical equation is given below.

Hydrobromic acid is mainly used for the production of inorganic bromides, especially the bromides of zinc, calcium, and sodium. It is a useful reagent for generating organobromine compounds. Certain ethers are cleaved with HBr. It also catalyzes alkylation reactions and the extraction of certain ores. Industrially significant organic compounds prepared from hydrobromic acid include allyl bromide, tetrabromobis (phenol), and bromoacetic acid. HBr almost uniquely participates in antiMarkovnikov hydrohalogenation of alkenes. The resulting 1-bromoalkanes are versatile alkylating agents, giving rise to fatty amines and quaternary ammonium salts.

Using more concentrated sulfuric acid or allowing the reaction solution to exceed 75 °C further oxidizes HBr to bromine gas. The acid is further purified by filtering out the KHSO4 and by distilling off the water until the solution reaches an azeotrope (≈ 126 °C at 760 torrs). The yield is approximately 85%. Hydrobromic acid is available commercially in various concentrations and purities.