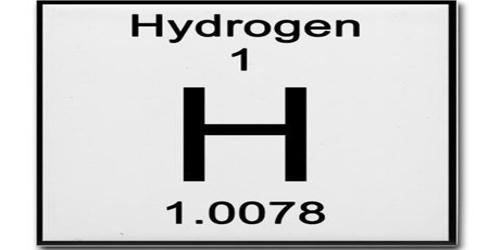 Hydrogen, H, is a highly flammable gas (H2)and the most common component of the universe. It is the chemical element with the symbol H and atomic number 1. It is a colorless, odorless, tasteless, flammable gaseous substance that is the simplest member of the family of chemical elements. With a standard atomic weight of 1.008, hydrogen is the lightest element in the periodic table. Hydrogen is the most abundant chemical substance in the universe, constituting roughly 75% of all baryonic mass. It is the smallest chemical element because it consists of only one proton in its nucleus. A hydrogen atom consists of one proton and one electron and it is the first element on the periodic table.

The universal emergence of atomic hydrogen first occurred during the recombination epoch (Big Bang). At standard temperature and pressure, hydrogen is a colorless, odorless, tasteless, non-toxic, nonmetallic, highly combustible diatomic gas with the molecular formula H2. The hydrogen atom has a nucleus consisting of a proton bearing one unit of positive electrical charge; an electron, bearing one unit of negative electrical charge, is also associated with this nucleus. Since hydrogen readily forms covalent compounds with most nonmetallic elements, most of the hydrogen on Earth exists in molecular forms such as water or organic compounds. It is the most abundant chemical substance in the universe, especially in stars and gas giant planets.

Hydrogen gas was first artificially produced in the early 16th century by the reaction of acids on metals. In 1766–81, Henry Cavendish was the first to recognize that hydrogen gas was a discrete substance and that it produces water when burned, the property for which it was later named: in Greek, hydrogen means “water-former”.