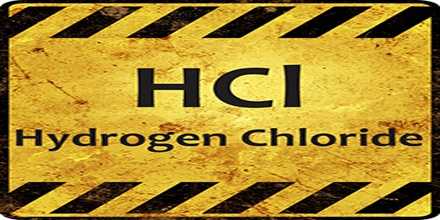 Hydrogen chloride is a colorless, corrosive, suffocating gas used in making plastics and in many industrial processes. When mixed with water, it forms hydrochloric acid. It is a Diatomic Molecule which consists of two atoms. The atoms in diatomic molecules may be similar (e.g. Oxygen Nitrogen Hydrogen etc.) or they may be dissimilar (e.g. Carbon Monoxide, Hydrogen Chloride, etc.). Hydrochloric acid, the aqueous solution of hydrogen chloride, is also commonly given the formula HCl. Formula and Structure of Hydrogen Chloride

Hydrogen chloride may be formed by the direct combination of chlorine (Cl2) gas and hydrogen (H2) gas; the reaction is rapid at temperatures above 250° C (482° F). The reaction, represented by the equation H2 + Cl2 → 2HCl, is accompanied by evolution of heat and appears to be accelerated by moisture. It is also produced by the reaction of some chlorides (e.g., phosphorus trichloride, PCl3, or thionyl chloride, SOCl2) with water and as a by-product of the chlorination of many organic substances (e.g., methane, benzene). Hydrogen chloride is a colourless gas of strong odour; it condenses at -85° C (-121° F) and freezes at -114° C (-173° F). The gas is very soluble in water: at 20° C (68° F) water will dissolve 477 times its own volume of hydrogen chloride. Because of its great solubility, the gas fumes in moist air. A water solution containing 20.24 percent by weight hydrogen chloride boils at 110° C (230° F) without change in composition. In aqueous solution the compound is extensively dissociated into a hydronium ion (H3O+) and chloride ion (Cl–); in dilute solutions the dissociation is essentially complete. Thus, hydrochloric acid is a strong acid.

Hydrogen chloride is a colorless, nonflammable gas with an acrid odor. The gas condenses to a liquid at -121°F (-85°C) and freezes into a solid at -173.2°F (-114°C). Hydrochloric acid is a colorless, fuming liquid having an irritating odor. Both hydrogen chloride and hydrochloric acid are corrosive, and so must be treated with great care. Both substances strongly irritate the eyes and are highly toxic if inhaled or ingested. Among its many applications in the chemical industries, hydrogen chloride is used: