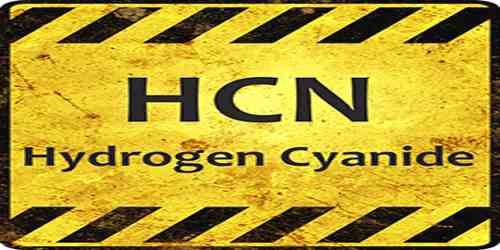 Hydrogen cyanide (HCN) is a colorless, flammable, extremely poisonous liquid that boils slightly above room temperature, at 25.6 °C (78.1 °F). Salts derived from it have many industrial uses, such as hardening iron and steel, extracting metals from ores, electroplating metallic surfaces, and making acrylonitrile, from which acrylic fibers and plastics are produced. It is also used to make dyes and poisons. A solution of hydrogen cyanide in water forms a colorless acid called hydrocyanic acid. Hydrogen cyanide is a linear molecule, with a triple bond between carbon and nitrogen. A minor tautomer of HCN is HNC, hydrogen isocyanide. Hydrogen cyanide is weakly acidic with a pKa of 9. 2. It partly ionizes in water solution to give the cyanide anion, CN.

It was discovered in 1782 by a Swedish chemist, Carl Wilhelm Scheele, who prepared it from the pigment Prussian blue. Hydrogen cyanide and its compounds are used for many chemical processes, including fumigation, the case hardening of iron and steel, electroplating, and the concentration of ores.

Occurrences and Properties of Hydrogen Cyanide

Hydrogen cyanide may be isolated in small quantities from plants, where it occurs in combination with sugars. Large quantities of hydrogen cyanide for laboratory and commercial use are synthesized by three principal methods: (1) treatment of sodium cyanide with sulfuric acid; (2) catalytic oxidation of a methane–ammonia mixture; and (3) decomposition of formamide (HCONH2). It is a linear molecule, with a triple bond between carbon and nitrogen. A minor tautomer of HCN is HNC, hydrogen isocyanide. Hydrogen cyanide is obtainable from fruits that have a pit, such as cherries, apricots, apples, and bitter almonds, from which almond oil and flavoring are made. Many of these pits contain small amounts of cyanohydrins such as mandelonitrile and amygdalin, which slowly release hydrogen cyanide. One hundred grams of crushed apple seeds can yield about 70 mg of HCN. Some millipedes release hydrogen cyanide as a defense mechanism, as do certain insects, such as some burnet moths. Hydrogen cyanide is an excellent solvent for many salts, but it is not widely used as a solvent because of its toxicity. The salts are used in the extraction of ores, in electrolytic processes, and in the treatment of steel. Among the important reactions with organic compounds are those with aldehydes and ketones, forming cyanohydrins, which serve as intermediates in many organic syntheses, and with ethylene oxide, forming an intermediate product that is converted to acrylonitrile (CH2=CHCN).

Hydrogen Cyanide is the precursor to sodium cyanide and potassium cyanide, which are used mainly in gold and silver mining and for the electroplating of those metals.