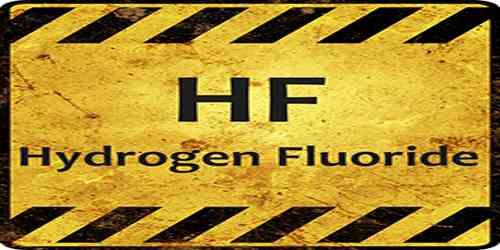 Hydrogen fluoride is a highly dangerous gas, forming corrosive and penetrating hydrofluoric acid upon contact with moisture. The gas can also cause blindness by rapid destruction of the corneas.

It is typically refers to a gas, used in the production of refrigerants, high-octane gasoline, aluminum, plastics, electrical components and incandescent light bulbs. When hydrogen fluoride is dissolved in water, it creates hydrofluoric acid, which is used in stainless steel pickling, glass etching, metal coatings, uranium isotope extraction and quartz purification.

Structure and Properties of Hydrogen Fluride Hydrogen Fluride, Anhydrousis a colorless fuming liquid boiling at 67°F. Shipped as a liquid confined under its own vapor pressure. Corrosive to metals and tissue. Very short contact with fumes or small quantities of the liquid can cause severe, painful burns. Vapors are heavier than air. Density 8.2 lb / gal. Used as a catalyst and raw material in chemical manufacture. It has a molar mass of 20 grams per mole. (In other words, one mole of hydrogen fluoride will weight approximately 20 grams. It is miscible, or will dissolve. Finally, hydrogen fluoride is also a weak acid, meaning that if it is added to water, it will only partially break down and release hydrogen ions.

Hydrogen fluoride is miscible with water (dissolves in any proportion), whereas the other hydrogen halides have large solubility gaps with water. Hydrogen fluoride and water also form several compounds in the solid state, most notably a 1:1 compound that does not melt until −40 °C (−40 °F), which is 44 °C (79 °F) above the melting point of pure HF.

Hydrogen fluoride is used in the production of aluminum and chlorofluorocarbons, and in the glass etching and chemical industries. Acute (short-term) inhalation exposure to gaseous hydrogen fluoride can cause severe respiratory damage in humans, including severe irritation and pulmonary edema. Due to its strong corrosive qualities, a diluted form of hydrofluoric acid is used in some commercial automotive cleaners, rust and stain removers and water-spot removers. The only developmental effect observed from fluoride exposure in humans is dental fluorosis which can occur in a child’s teeth when a mother receives high levels of fluoride during pregnancy.