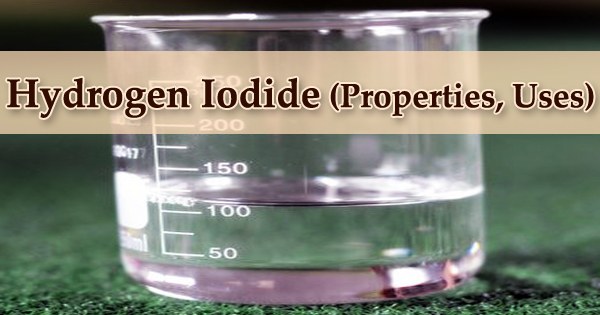 Hydrogen iodide (HI), also known as hydroiodic acid or hydriodic acid, is a diatomic molecule and hydrogen halide that appears as a colorless to yellow liquid with a pungent odor. The molecular weight of this compound is 127.91. Gases that are colorless, pale yellow liquids, or solid blobs. The odor is powerful and intense. The melting point is 50.8oC, the boiling point is 35.38oC, the relative density is 5.660 for gas and 2.85-4.7 for liquid, and the refractive index is 1.46616. It’s made up of a hydrogen iodide solution in water. The eyes and mucous membranes are irritated by fumes. Metals and tissue are both corroded.

The difference between hydrogen iodide and hydroiodic acid is that the former is a gas under normal conditions, whilst the latter is an aqueous solution of the gas. In ethanol, it is slightly soluble. Heats up to disintegrate into hydrogen and iodine when exposed to light. Significantly decomposition above 300 ℃. Its constant boiling solution is colorless or light-yellow fuming liquid, boiling point is 127 °C, relative density is 1.7015, strong acid (degree of dissociation of 0.1 molL-1 hydroiodic solution up to 95%), present in non-electrolytes or weak electrolytes, its ionization constant in pyridine is 3 10-3, and its ionization constant in pyridine is 3 × 10-3.

One of the principal sources of iodine and a reducing agent, HI is utilized in organic and inorganic synthesis. Iodine I-125 is a radioactive isotope of the nonmetallic halogen element iodine. Iodine 125 occurs naturally and can be synthesized artificially. It has a half-life of 60 days. This drug can be used for both therapeutic and diagnostic purposes, especially in the case of thyroid illness. HI produces a mist (or fumes) of hydroiodic acid when exposed to moist air; it is extremely soluble in water, yielding hydroiodic acid.

It has the highest reducibility among hydrohalic acids and can be oxidized to free iodine by Cl2, Br2, and concentrated sulfuric acid. Concentrated nitric acid, concentrated sulfuric acid, and air at room temperature can all be used to oxidize it. It interacts with almost all metals to produce iodide and hydrogen. Hydroiodic acid is a combination comprising hydrogen iodide, rather than pure hydrogen iodide. Hydroiodic acid that is sold as “concentrated” usually has 48–57% HI by mass.

Because the ion radius of iodide is substantially bigger than that of other common halides, the negative charge is diffused across a vast area. Water was put dropwise on a mixture of phosphorus and iodine by heating a reaction of sodium iodide and phosphoric acid or a combination of phosphorus with iodine, or by suspending iodine in water and ventilating with hydrogen sulfide. Hydriodic acid gas is injected into the water to produce a continuously boiling solution.

The negative charge of a chloride ion, on the other hand, is concentrated, resulting in a greater contact between the proton and the chloride ion. When new, HI is colorless, but in the presence of air and sunlight, it quickly precipitates iodine in the form of yellow to brown precipitates. The relative density of azeotrope (56.9% HI) is 1.70. The boiling point is 127 degrees Celsius. The reaction of I2 with hydrazine, which also produces nitrogen gas, is used in the industrial manufacture of HI:

A solution of NaI or another alkali iodide in concentrated phosphoric acid can also be used to make HI (note that concentrated sulfuric acid will not work for acidifying iodides, as it will oxidize the iodide to elemental iodine). Another method for making HI is to pass hydrogen sulfide steam through an aqueous iodine solution, resulting in hydroiodic acid (which is distilled) and elemental sulfur (this is filtered):

Additionally, HI can be prepared by simply combining H2 and I2:

Hydriodic acid is employed as a catalyst in the production of acetic acid, as a pharmaceutical intermediary, in a variety of disinfectant/sanitization formulations, including mastitis teat dips, and in the production of organic and inorganic iodides. Toxic when inhaled; Skin, eyes, and mucous membranes are all severely irritated. Inhaling low quantities for a long time or inhaling large quantities for a short time can have negative health consequences. The container may rupture and rocket if it is exposed to fire or extreme heat for an extended period of time.

Solutions of hydrogen iodide are easily oxidized by air:

It’s made by combining iodine with hydrogen sulfide or hydrazine, or by using an electrolytic technique. Hydrogen iodide reacts aggressively with alkalis and forms corrosive acids when it combines with water. Most metals corrode quickly when they come into touch with wet hydrogen iodide, and prolonged exposure to fire or high heat has been known to cause the container to rupture and rocket. In organic chemistry, HI is used to convert primary alcohols into alkyl halides.

Because the iodide ion is a considerably stronger nucleophile than bromide or chloride, HI is favored over other hydrogen halides because the reaction can proceed at a moderate rate without much heating. Hydroiodide and hydroiodic acid, on the other hand, differ in that the former is a gas under ordinary conditions while the latter is an aqueous solution of the former. In a reaction comparable to the substitution of alcohols, HI can be used to cleave ethers into alkyl iodides and alcohols. This cleavage is important because it can be utilized to transform a chemically stable and inert ether into a more reactive molecule.

Strong acids cannot be used to make hydrogen iodide gas because it is easily oxidized; instead, it must be made from a weak acid and iodine, or by hydrolysis of specific iodides. It is employed as a reducing agent and one of the principal sources of iodine in organic and inorganic synthesis. HI is also used to determine methoxy, as well as to dissolve acid-insoluble (particularly heated) inorganic substances such alkaline earth metal sulfate and mercury iodide.