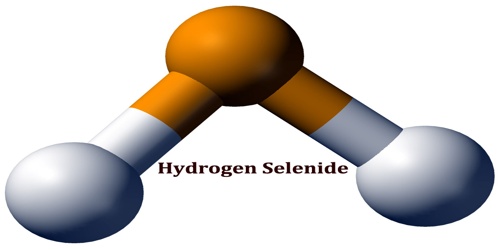 Hydrogen selenide is a key intermediate in the selenium methylation metabolism of inorganic and organic selenium compounds with the formula H2Se. It is a colorless, flammable gas under standard conditions. It is the most toxic selenium compound with an exposure limit of 0.05 ppm over an 8 hour period. H2Se is a metabolite of selenium which could have potential antiangiogenic effect in the chemoprevention of cancer. In 1817 Swedish chemist Jöns Jacob Berzelius noted a red substance resulting from sulfide ores from mines of Falun, Sweden. When this red material was investigated in the following year, it proved to be an element and was named after the Moon or the Moon goddess Selene. An ore of unusually high selenium content was discovered by Berzelius only days before he made his report to the scientific societies of the world on selenium. His sense of humour is evident in the name he gave the ore, eucairite, meaning “just in time.”

H2Se is commonly used in the synthesis of Se-containing compounds. It adds across alkenes. Illustrative is the synthesis of selenoureas from cyanamides. H2Se gas is also used to dope semiconductors with selenium. Hydrogen selenide is not decomposed by daylight but it is sensitive to ultra-violet light. In the presence of moisture, oxygen rapidly decomposes the gas, but if the oxygen and the gas are both dry there is no action. It burns with a blue flame, producing water and selenium or selenium dioxide, according to the supply of oxygen.

When passed over heated iron boride, the gas interacts, forming iron selenide and selenium boride. With water no stable compound is produced, although the existence of an unstable crystalline hydrate has been observed. With ammonia, hydrogen selenide reacts at the ordinary temperature with the formation of a white crystalline mass of ammonium selenide, (NH4)2Se; the same compound is produced by passing hydrogen selenide into a concentrated aqueous solution of ammonia at 0° C., the air in the apparatus having been displaced by nitrogen.

Hydrogen selenide is hazardous, being the most toxic selenium compound and far more toxic than its congener hydrogen sulfide. The threshold limit value is 0.05 ppm. The gas acts as an irritant at concentrations higher than 0.3 ppm, which is the main warning sign of exposure; below 1 ppm, this is “insufficient to prevent exposure”, while at 1.5 ppm the irritation is “intolerable”. It is suspected that this is due to the gas’ tendency to oxidise to form red selenium in mucous membranes; elemental selenium is less toxic than selenides are.