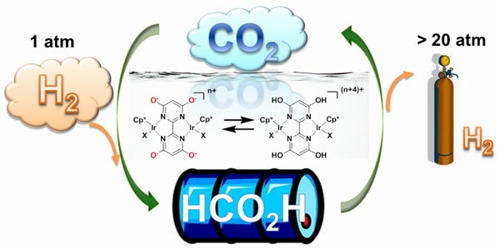 Hydrogen storage is a term used for any of several methods for storing hydrogen for later use. It is a key enabling technology for the advancement of hydrogen and fuel cell technologies in applications including stationary power, portable power, and transportation. These methods encompass mechanical approaches such as high pressures and low temperatures, or chemical compounds that release H2 upon demand. Hydrogen can be stored physically as either a gas or a liquid. Storage of hydrogen as a gas typically requires high-pressure tanks (350–700 bar [5,000–10,000 psi] tank pressure).

While large amounts of hydrogen are produced, it is mostly consumed at the site of production, notably for the synthesis of ammonia. Interest in hydrogen storage is driven by the idea that it could be a medium for storing energy, e.g. to compensate for intermittent energy sources. Storage of hydrogen as a liquid requires cryogenic temperatures because the boiling point of hydrogen at one-atmosphere pressure is −252.8°C.  Compressed hydrogen in hydrogen tanks at 350 bar (5,000 psi) and 700 bar (10,000 psi) is used in hydrogen vehicles.

Hydrogen has the highest energy per mass of any fuel; however, its low ambient temperature density results in a low energy per unit volume, therefore requiring the development of advanced storage methods that have the potential for higher energy density. The overarching challenge is the very low boiling point of H2: it boils around 20.268 K (−252.882 °C or −423.188 °F). Achieving such low temperatures requires significant energy. The most common method of hydrogen storage is compression of the gas phase at high pressure (> 200 bars or 2850 psi).

To fulfill such requirements there are main problems for hydrogen storage such as:

Batteries are not suitable for storing large amounts of electricity over time. For all approaches of hydrogen storage, vessel containment that is resistant to hydrogen permeation and corrosion is required. A major advantage of hydrogen is that it can be produced from (surplus) renewable energies, and unlike electricity, it can also be stored in large amounts for extended periods of time. For that reason, hydrogen produced on an industrial scale could play an important part in the energy transition. The most important hydrogen storage methods, which have been tried and tested over lengthy periods of time, include physical storage methods based on either compression or cooling or a combination of the two (hybrid storage). Hydrogen is considered as green energy because it can be generated from renewable sources and is non-polluting.