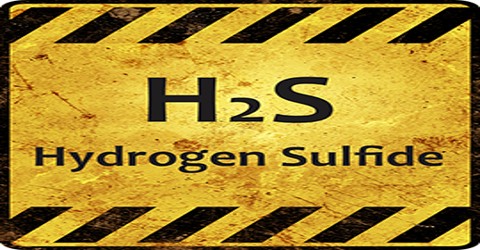 Hydrogen sulfide is a colorless, poisonous gas that smells like rotten eggs. It is formed naturally by decaying organic matter and is the smelly component of intestinal gas. It is heavier than air it tends to accumulate at the bottom of poorly ventilated spaces. It smells like rotten eggs, irritates eyes, and when inhaled in low concentrations, irritates respiratory tract. Higher concentrations can cause breathing difficulty, nausea, vomiting, and even death. It is also emitted by volcanoes and fumaroles. Hydrogen sulfide is used in the petroleum, rubber, and mining industries, and in making sulfur. Its chemical formula is H2S.

Hydrogen Sulfide is a covalent hydride chemically related to water (H2O) since oxygen and sulfur occur in the same periodic table group. It often results when bacteria break down organic matter in the absence of oxygen, such as in swamps, and sewers. It also occurs in volcanic gases, natural gas and some well waters.

It can also be produced by reacting hydrogen gas with molten elemental sulfur at about 840°F (450°C). Hydrocarbons can replace hydrogen in this process. Hydrogen sulfide production can be costly because of the dangers involved in production. Hydrogen Sulfide is most commonly obtained by its separation from sour gas, which is natural gas with high content of H2S. It can also be produced by treating hydrogen with molten elemental sulfur at about 450 °C. Hydrocarbons can serve as a source of hydrogen in this process. Hydrogen Sulfide (or H2S) occurs naturally in crude petroleum, natural gas, volcanic gases, and hot springs. It can also result from bacterial breakdown of organic matter. It is also produced by human and animal wastes. Bacteria found in your mouth and gastrointestinal tract produce hydrogen sulfide from bacteria decomposing materials that contain vegetable or animal proteins. Hydrogen sulfide can also result from industrial activities, such as food processing, coke ovens, kraft paper mills, tanneries, and petroleum refineries. Hydrogen sulfide is a flammable, colorless gas with a characteristic odor of rotten eggs. It is commonly known as hydrosulfuric acid, sewer gas, and stink damp. People can smell it at low levels.

Hydrogen sulfide may have anti-aging properties by blocking destructive chemicals within the cell, bearing similar properties to resveratrol, an antioxidant found in red wine. It is commonly found in raw natural gas and biogas. It is typically removed by amine gas treating technologies. In such processes, the hydrogen sulfide is first converted to an ammonium salt, whereas the natural gas is unaffected.