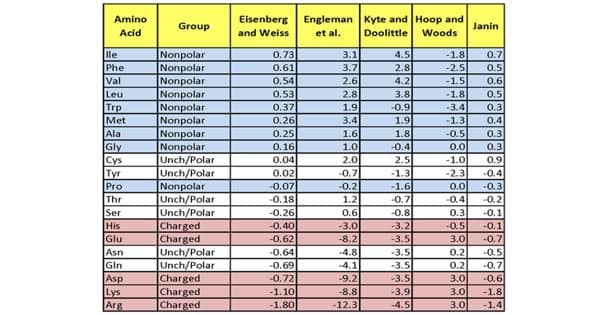 About a dozen different scales of hydrophilicity or hydrophobicity have been derived from measurements of partition coefficients of amino acids between two noninteracting isotropic phases as well as by several other methods. These scales are commonly used to predict the transmembrane alpha-helices of membrane proteins. Hydrophobicity profiles have been used to predict the location of turns in proteins. When consecutively measuring amino acids of a protein, changes in value indicate attraction of specific protein regions towards the hydrophobic region inside the lipid bilayer. A hydrophobicity profile is a plot of the residue number versus residue hydrophobicity, averaged over a running window.

Hydrophobicity scales are routinely applied to the recognition of TM α-helices by averaging over a window and by searching for hydrophobic stretches at least 15 residues long. The hydrophobic or hydrophilic character of a compound or amino acid is sometimes called its hydropathic character, hydropathicity, or even “hydropathy” (which originally meant the therapeutic use of water). Two scales are needed, one for the transfer of unfolded chains from water to bilayer interface and one for the transfer of folded chains into the hydrocarbon interior.

Physical property methods are used to develop hydrophobicity scales that are based on the measurement of various physical properties. Partial molar heat capacity, transition temperature, and surface tension are a few examples. Physical methods are simple to apply and adaptable in terms of solute. The most widely used hydrophobicity scale was developed by measuring surface tension values for the 20 amino acids found naturally in NaCl solution.

The main disadvantage of measuring surface tension is that the broken hydrogen bonds and neutralized charged groups remain at the solution-air interface. Another method for determining physical properties is to calculate the solvation free energy. The solvation-free energy is calculated as the product of an atom’s accessibility to the solvent and an atomic solvation parameter. The results show that folding reduces the solvation-free energy by an average of 1 Kcal/residue.