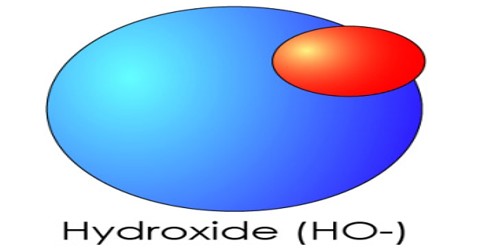 Hydroxide is a chemical compound containing one or more hydroxyl radicals (OH). The positively charged portion of the compound usually is the ion of a metal (e.g., sodium, magnesium, or aluminum), although it may be an organic group (e.g., guanidinium or tetramethylammonium). It is an important but usually minor constituent of water. It functions as a base, a ligand, a nucleophile and a catalyst. The hydroxide ion forms salts, some of which dissociate in aqueous solution, liberating solvated hydroxide ions. Sodium hydroxide is a multi-million-ton per annum commodity chemical. In some cases the products of partial hydrolysis of metal ion, described above, can be found in crystalline compounds. The compound originally formulated as ZrOCl2·8H2O was found to be the chloride salt of a tetrameric cation in which there is a square of Zr4+ ions with two hydroxide groups bridging between Zr atoms on each side of the square and with four water molecules attached to each Zr atom.

Structure: The hydroxide ion appears to rotate freely in crystals of the heavier alkali metal hydroxides at higher temperatures so as to present itself as a spherical ion, with an effective ionic radius of about 153 pm. It displays cylindrical symmetry in hydroxides of divalent metals Ca, Cd, Mn, Fe, and Co. For example, magnesium hydroxide Mg(OH)2 (brucite) crystallizes with the cadmium iodide layer structure, with a kind of close-packing of magnesium and hydroxide ions. The hydroxides of the alkali metals, lithium, sodium, potassium, rubidium, and cesium, are the strongest bases and the most stable and most soluble of the hydroxides. Sodium hydroxide, NaOH, also known as caustic soda or lye, is of great industrial importance. Calcium, barium, and strontium—all alkaline earth metals—form soluble hydroxides that are strong bases but are less stable than the alkali hydroxides. Of these, calcium hydroxide, Ca(OH)2, commonly known as slaked lime, is the most common. Hydroxides and other substances, such as oxides and sulfides, with these dual properties are called amphoteric.