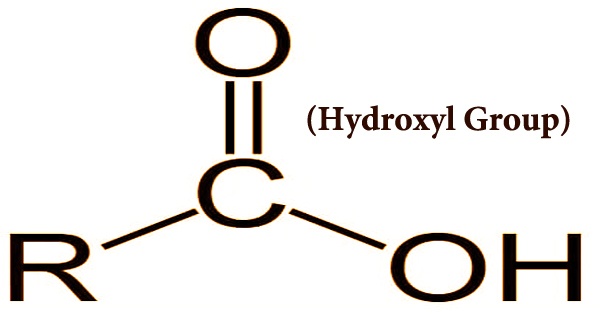 A pair of atoms commonly found in organic compounds, such as sugars and alcohols, is a hydroxy or hydroxyl group. It is the OH formulation entity; it contains oxygen bound to hydrogen. This functional group, also spelled hydroxy, provides significant functions for both alcohols and carboxylic acids. An unbounded hydroxyl group consists of both the negatively charged anion OH-, called hydroxide, and the neutral radical ·OH, referred to as the hydroxyl radical. Alcohols, with a functional hydroxyl group side chain, are chains of carbon molecules. Alcohols add a small polarity to the electronegativity of oxygen, which is why they are able to bind with other polar molecules, such as water and other solutes.

It is easy to deprotonate water, alcohol, carboxylic acids, and many other hydroxy-containing compounds. The disparate electronegativity of oxygen and hydrogen rationalizes this action. Organic molecules are based on carbon and can contain oxygen, hydrogen, sulfur, nitrogen, and/or phosphorus as well. These molecules are structurally composed of two main components. The carbon backbone, of which the carbon atoms are bound together to form a carbon backbone, is the first element. The second are the functional groups, which are small groups of atoms that are bound to the carbon backbone, such as hydrogen and oxygen. Functional groups are so called because they function as the molecule’s chemically reactive area.

Below is general alcohol that contains a group of hydroxyls. The red atom is oxygen, while the grey atom represents hydrogen.

The “R” in the structural formula stands for the organic molecule’s carbon backbone to which the hydroxyl attaches. Within their functional carboxyl group, carboxylic acids contain a hydroxyl group. A carboxyl group consists of a group of carbonyl bonded to a group of hydroxyl. Compounds containing hydroxyl participate in hydrogen bonding, causing them to stick together, resulting in higher boiling and melting than those found for compounds that do not have this functional group.

A carbonyl group is merely a double carbon bonded to oxygen. Together, these two functional groups create an extremely reactive molecule, which is prone to new carbon-carbon bonds being formed. As shown by sugars and amino acids, organic compounds, mostly poorly soluble in water, become water-soluble when they contain two or more hydroxy groups. The resulting molecules are alcohols, since hydroxyl groups are the predominant functional group bonded to carbon backbones.

In chemistry and biochemistry, the hydroxy group is omnipresent. Many inorganic compounds contain hydroxy groups, like sulfuric acid, the most industrially manufactured chemical compound. Additional examples of alcohols that contain the hydroxyl group include methanol, isopropyl alcohol, and propanol. Because oxygen has a greater attraction to the electrons that bind hydrogen to the molecule, it is easier for the hydroxyl group to lose hydrogen to an atom that shares electrons more equally.

Hydroxyl groups, too, include carbohydrate molecules, or sugars. In the dehydration reactions that bind simple biological molecules into long chains, hydroxy groups participate. Sugars, however, also contain another essential functional group that alcohols don’t have, called the carbonyl group (-CO). This is what separates alcohol from sugar. Hydroxyl radicals are highly reactive and undergo short-lived chemical reactions. When exposed to hydroxyl radicals, biological systems can cause cell damage, even in humans, where they can react with DNA, lipids, and proteins.