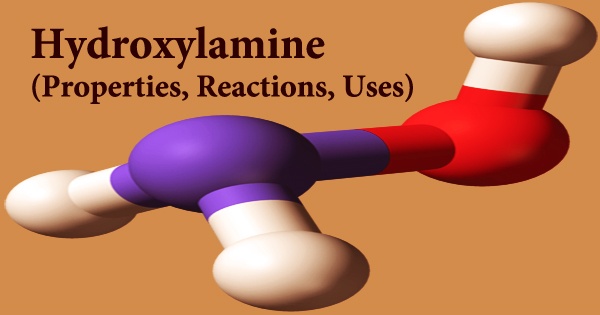 Hydroxylamine is an inorganic compound with the formula NH2OH that is the hydroxyl derivative of ammonia. It’s a chemical that’s used to produce oximes from aldehydes and ketones. The pure material is a hygroscopic, white, unstable crystalline compound. Oximes are readily converted to amines, which are used to make dyes, fabrics, synthetic fibers, and pharmaceuticals; the oxime of cyclohexanone can be converted to its isomer epsilon-caprolactam, which is used to make nylon-6. Hydroxylamine forms oximes, which are intermediates in the industrial manufacture of polyamide plastics, as it reacts with aldehydes.

Hydroxylamine is a chemical intermediate in the biological nitrification process, which is carried out by microbes such as bacteria. It acts as a nitric oxide donor, a nucleophilic reagent, an EC 4.2.1.22 (cystathionine beta-synthase) inhibitor, an EC 4.3.1.10 (serine-sulfate ammonia-lyase) inhibitor, a bacterial xenobiotic metabolite, and an algal metabolite. Hydroxylamine, on the other hand, is almost always supplied and used as an aqueous solution. It’s used to make oximes, which are a key functional group. It’s also a step in the biological nitrification process.

Hydroxylamine is used as an antioxidant in photographic developers, to stabilize polymerization monomers, and to reduce Cu2+ in the dyeing of acrylic fibers due to its reduction ability. In 1865, the German chemist Wilhelm Clemens Lossen (1838-1906) synthesized hydroxylamine hydrochloride by reacting tin and hydrochloric acid in the presence of ethyl nitrate. Hydroxylamine and its inorganic salts are strong reducing agents that are used in the manufacture of polymers as well as in photographic developers. Hydroxylamine can be made in a number of ways; the hydrolysis of nitroalkanes (RCH2NO2) and the catalytic hydrogenation of nitric oxide are two of the most common (NO).

Hydroxylamine can be converted into the aminating agent hydroxylamine-O-sulphonic acid. It is made up of an ammonia hydride. Lobry de Bruyn, a Dutch chemist, and Léon Maurice Crismer, a French chemist, were the first to prepare it in pure form in 1891. When the coordination complex ZnCl2(NH2OH)2, also known as Crismer’s salt, is heated, it releases hydroxylamine. Hydroxylamine can also be used as a nitrification intermediate. It’s also used in the semiconductor industry to clean formations like aluminum interconnect.

As a free base, hydroxylamine is unstable. It’s made from hydroxy-lamine hydrochloride, NH2OH?HCl, which is made from ammonium chloride solution electrolytically reduced. The hydrochloride decomposes alkaline to hydroxylamine, which is obtained using vacuum distillation. NH2OH can be rendered in a number of ways. The Raschig process reduces aqueous ammonium nitrite with HSO3 and SO2 at 0 °C to create the hydroxylamido-N,N-disulfonate anion:

Hydroxylamine is a thermally unstable white solid that decomposes rapidly at room temperature or when dissolved in hot water due to internal oxidation-reduction. It can be used as an oxidizing or reducing agent and explodes when heated. It is produced by reducing nitrates or nitrites and is used in the production of nylon. Treatment with liquid ammonia may be used to extract solid NH2OH. Filtration eliminates ammonium sulfate, (NH4)2SO4, a side substance insoluble in liquid ammonia; liquid ammonia is evaporated to yield the desired product.

As a reducing agent in photography; as a purifier of aldehydes and ketones; as an antioxidant for fatty acids and soaps; and as a dehairing agent for hides. By neutralizing hydroxylammonium salts, they can be converted to hydroxylamine:

When heated, hydroxylamine reacts explosively with strong oxidizers (chromium trioxide, potassium dichromate) or powdered zinc and should be kept below 10°C. Bishydroxylamides are formed when zinc or calcium are combined. Cupric sulfate, alkali metals (sodium, potassium), oxidants (e.g., barium oxide, barium peroxide, lead dioxide, potassium permanganate, chlorine), phosphorus trichloride, and pentachloride all burn when they come into contact with it.

The world’s hydroxylamine production potential is 800,000 tons per year; it can also be made by reducing nitrous acid or potassium nitrite with bisulfite.:

Hydroxylamine can spontaneously ignite in air when it comes into contact with organic materials in a thin layer (for example, crystals on filter paper). When heated past 70°C, it explodes. An explosion occurred during the distillation process. The explosion is believed to have been caused by potassium hydroxide. Chest pains and chemical burns were recorded by workers at the factory. Electrophiles, such as alkylating agents, react with hydroxylamine and may bind to either the oxygen or nitrogen atoms:

The material is irritating to the skin and respiratory tract, as well as corrosive to the eyes. The drug can have blood-related effects. Methaemoglobin can develop as a result of this. The effects can take some time to manifest; medical monitoring is recommended. When hydroxylamine is added to a solution of an aldehyde or ketone, an oxime forms, which usually precipitates out of solution; heating the precipitate with an inorganic acid then restores the initial aldehyde or ketone. Headache, vertigo, tinnitus, dyspnea, nausea and vomiting, cyanosis, proteinuria and hematuria, jaundice, restlessness, and convulsion are all potential symptoms when inhaled or taken orally.

Iodometric titration can be used to inspect the hydroxylamine-O-sulfonic acid, which should be kept at 0 °C to avoid decomposition. The oxidation of an amine with benzoyl peroxide is the most popular method for producing substituted hydroxylamines. To avoid over-oxidation to nitrone, some caution is needed. Hydroxylamine and its salts are used in a variety of industries, such as reducing agents in color film developers and as laboratory reagents. It has not been proven that hydroxylamine and its salts are carcinogenic. Several studies have shown that mice exposed to sulfate and hydrochloride had a lower occurrence of spontaneous mammary tumors.

Hydroxylamine can also be used to cleave asparaginyl-glycine peptide bonds in peptides and proteins with extreme precision. It also binds to heme-containing enzymes and disables (poisons) them permanently. It’s used as a reducing agent and as a nucleophile in aromatic substitution reactions. Because of its close structure to water, it is often used as an irreversible inhibitor of the oxygen-evolving complex of photosynthesis. Hydroxylamine is commonly used in the semiconductor industry as part of the “resist stripper,” which is used to eliminate photoresist after lithography.