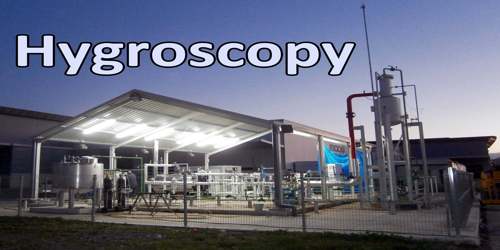 Hygroscopy: It is relating to a compound that easily absorbs moisture from the atmosphere. When water vapor is absorbed the water molecules are taken into the molecules of the substance, often resulting in physical changes, such as increased volume. Color, boiling point, temperature, and viscosity may also change. When water vapor is adsorbed, the water molecules remain on the surface of the material. The word hygroscopy (/haɪˈɡrɒskəpi/) uses combining forms of hygro- and -scopy. Unlike any other -scopy word, it no longer refers to a viewing or imaging mode. It did begin that way, with the word hygroscope referring in the 1790s to measuring devices for humidity level. Hygroscopic substances include cellulose fibers (such as cotton and paper), sugar, caramel, honey, glycerol, ethanol, wood, methanol, sulfuric acid, many fertilizer chemicals, many salts (including sodium chloride), and a wide variety of other substances. Typically, this occurs at or near ordinary room temperature. Most hygroscopic materials are salts, but many other materials display the property. The similar-sounding but unrelated word hydroscopic is sometimes used in error for hygroscopic. A hydroscope is an optical device used for making observations deep under water.

Calcium chloride is so hygroscopic that it eventually dissolves in the water it absorbs: this property is called deliquescence. Materials and compounds exhibit different hygroscopic properties and this difference can lead to detrimental effects, such as stress concentration in composite materials. Hygroscopic chemicals require special care. Typically, they are stored in air-tight, sealed containers. They may also be maintained under kerosene, oil, or within a dry atmosphere.

Many engineering polymers are hygroscopic, including nylon, ABS, polycarbonate, cellulose, and poly (methyl methacrylate). Other polymers, such as polyethylene and polystyrene, do not normally absorb much moisture, but are able to carry significant moisture on their surface when exposed to liquid water. Type-6 nylon can absorb up to 9.5% of its weight in moisture.

Uses and Examples of Hygroscopy

Hygroscopic substances may be used to keep products dry or to remove water from an area. They are commonly used in desiccators. Hygroscopic materials may be added to products because of their ability to attract and hold moisture. Here, the substances are referred to as humectants. Examples of humectants used in food, cosmetics, and drugs, include salt, honey, ethanol, and sugar. Zinc chloride, sodium chloride and sodium hydroxide crystals are hygroscopic. Silica gel, honey, nylon, and ethanol are also hygroscopic. Sulfuric acid is hygroscopic not only when concentrated, but also down to a concentration of 10% v/v or even lower.

Germinating seeds are also hygroscopic. The seed of Hesperostipa comata twists and untwists, depending on its hydration level, drilling the seed into soil.