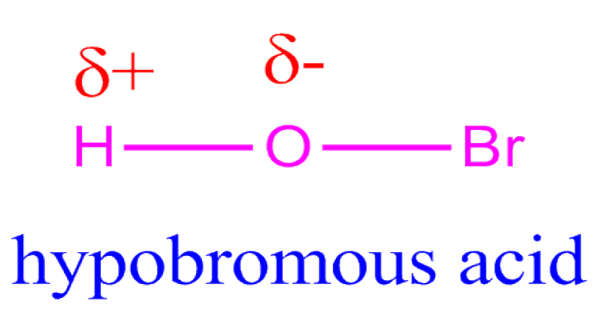 Hypobromous acid has the chemical formula HOBr and is a weak, unstable acid. It is also known as “bromanol” or “hydroxidobromine.” It is primarily manufactured and handled in an aqueous solution. It exists only in solution and shares many chemical and physical properties with hypochlorous acid, HClO. As a disinfectant, it is produced both biologically and commercially. Hypobromite salts are rarely isolated as solids. It’s an oxoacid of bromine. It is a hypobromite conjugate acid.

The molecular formula, or chemical formula, for the chemical compound hypobromous acid, is HBrO. Furthermore, an image of its chemical structure is provided below in the form of a picture of some of the common representations that we commonly use for organic molecules.

The addition of bromine to water gives hypobromous acid and hydrobromic acid (HBr) via a disproportionation reaction.

In nature, hydrobromous acid is produced by bromoperoxidases, which are enzymes that catalyze the oxidation of bromide with hydrogen peroxide:

Hypobromous acid has a pKa of 8.65 and is therefore only partially dissociated in water at pH 7. As the acid, hypobromite salts are unstable and undergo a slow disproportionation reaction to yield the respective bromate and bromide salts.

Its chemical and physical properties are similar to those of other hypohalites.

Because of its ability to kill the cells of many pathogens, HOBr is used as a bleach, oxidizer, deodorant, and disinfectant. The compound is produced by warm-blooded vertebrate organisms, particularly eosinophils, through the action of eosinophil peroxidase, an enzyme that preferentially uses bromide.

Bromide is also used as a germicidal agent in hot tubs and spas, using the action of an oxidizing agent to generate hypobromite in a manner similar to peroxidase in eosinophils. It works especially well when combined with its congener, hypochlorous acid.

Hypobromous Acid has the capacity to kill pathogens and bacterias hence it is used as a disinfectant, oxidizer, bleach, and a deodorant.