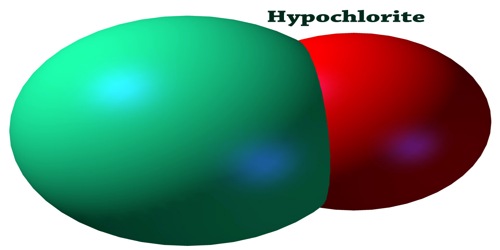 Hypochlorites are frequently quite unstable in their pure forms and for this reason are normally handled as aqueous solutions. Their primary applications are as bleaching, disinfection and water treatment agents but they are also used in chemistry for chlorination and oxidation reactions.

About 28% of oxygen consumed by phagocytes upon activation participates in its generation. Hypochlorite reacts with H2O2 producing singlet oxygen, which is a strong initiator of Lipid peroxidation. O-sub 2, along with H2O2 can serve as the substrate for myeloperoxidase. When this takes place, Hypochlorite is formed. Hypochlorite is able to modify antioxidants incorporated into lipoproteins such as Alpha-tocopherol, Beta-carotene, lycopene, and ubiquinol-10. It is also able to modify a number of proteins which possess antioxidant functions such as ceruloplasmin, transferrin, superoxide dismutase, and catalase. The human immune system generates minute quantities of hypochlorite during the destruction of pathogens. This takes place within special white blood cells, called neutrophil granulocytes, which engulf viruses and bacteria in an intracellular vacuole called the phagosome, where they are digested. Part of the digestion mechanism involves an enzyme-mediated respiratory burst, which produces reactive oxygen-derived compounds, including superoxide, which is produced by NADPH oxidase. Superoxide decays to oxygen and hydrogen peroxide, which is used in a myeloperoxidase-catalysed reaction to convert chloride to hypochlorite. The main reaction of Hypochlorite with unsaturated lipid is probably the generation of chlorohydrins. However, this reaction is not accompanied by generation of free radicals and Lipid peroxidation. This reaction is accompanied by the production of free radicals (but not singlet oxygen), probably alkoxyl radicals, which may play a role in the initiation of Hypochlorite-induced Lipid peroxidation.

Hypochlorites are generally unstable and many compounds exist only in solution. Hypochlorite is unstable with respect to disproportionation. Upon heating, it degrades to a mixture of chloride, oxygen and other chlorates: