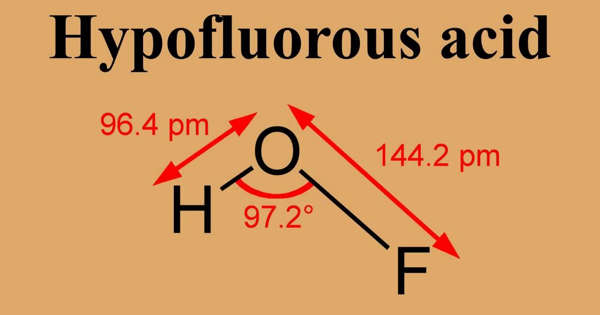 A hypohalous acid is an oxyacid consisting of a hydroxyl group single-bonded to any halogen. It is an oxyacid of a halogen (fluorine, chlorine, bromine, iodine, or astatine) possessing the general chemical formula HOX, where X is the halogen atom. Examples include hypofluorous acid, hypochlorous acid, hypobromous acid, and hypoiodous acid. The conjugate base is a hypohalite. It is an acid HXO derived from halogens and including hypochlorous acid, hypobromous acid, and hypoiodous acid. They can be formed by reacting the corresponding diatomic halogen molecule (F2, Cl2, Br2, I2) with water in the reaction:

This also results in the corresponding hydrogen halide, which is also acidic.

The compound has been characterized in the solid phase by X-ray crystallography as a bent molecule with an angle of 101°. The O–F and O–H bond lengths are 144.2 and 96.4 picometres, respectively. The solid framework consists of chains with O–H···O linkages. The structure has also been analyzed in the gas phase, a state in which the H–O–F bond angle is slightly narrower (97.2°).

Hypohalous acids tend to be unstable. The chemical behavior of hypofluorous acid (HOF) is dramatically different from the heavier hypohalous acids which, as a group, exhibit similar properties. Only hypofluorous acid has been isolated as a solid, and even it is explosive at room temperature. These differences are attributed primarily to the high electronegativity and small size of the fluorine atom, which cause HOF to be an extremely strong oxidant with an anomalously weak O-F bond.

Hypochlorous acid cannot be prepared in anhydrous form. It is any oxyacid of a halogen of the general formula HOX. Hypobromous acid, hypoiodous acid, and their conjugate bases (hypobromite and hypoiodite) are also unstable, undergoing disproportionation reactions like

that results in the corresponding hydrogen halides/halide ions and halic acids/halates. HOF, therefore, acts primarily as an oxygenating and hydroxylating agent, whereas the other hypohalous acids are electrophilic halogenating agents.