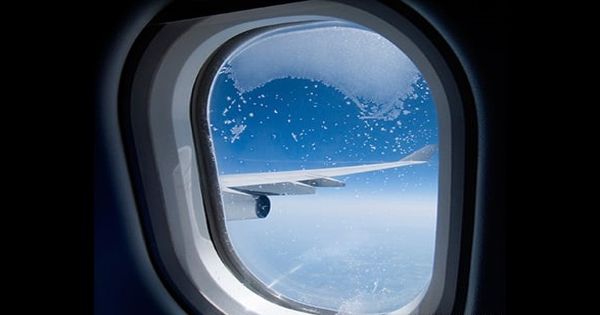 Ice will form on an aircraft if liquid water hits a part of the airframe which has a temperature below freezing. In aviation, icing conditions are atmospheric conditions that can lead to the formation of water ice on an aircraft. In-Flight Airframe Icing occurs when supercooled water freezes on impact with any part of the external structure of an aircraft during flight. Ice accretion can affect the external surfaces of an aircraft – in which case it is referred to as airframe icing – or the engine, resulting in carburetor icing, air inlet icing, or more generically engine icing. Although the nominal freezing point of water is 0°C, water in the atmosphere does not always freeze at that temperature and often exists as a “supercooled” liquid. These phenomena do not necessarily occur together. If the surface temperature of an aircraft structure is below zero, then moisture within the atmosphere may turn to ice as an immediate or secondary consequence of the contact. Both airframe and engine icing have resulted in numerous fatal accidents in aviation history.

Not all aircraft, especially general aviation aircraft, is certified for flight into known icing (FIKI) – that is icing conditions certain or likely to exist, based on pilot reports, observations, and forecasts. Airframe Icing can lead to reduced performance, loss of lift, altered controllability, and ultimately stall and subsequent loss of control of the aircraft. In order to be FIKI-certified, aircraft must be fitted with suitable ice protection systems.

Icing conditions exist when the air contains droplets of supercooled liquid water; icing conditions are characterized quantitatively by the average droplet size, the liquid water content, and the air temperature. At very low temperatures, ice tends to form close to leading edges and is generally easy to see. These parameters affect the extent and speed that characterize the formation of ice on an aircraft. At temperatures just below zero, the ice spreads back, is less visible, and affects more of the airframe. Federal Aviation Regulations contain a definition of icing conditions that some aircraft are certified to fly into.

Qualitatively, pilot reports indicate icing conditions in terms of their effect upon the aircraft, and will be dependent upon the capabilities of the aircraft. The severity of icing conditions varies enormously, and depends on the concentration of supercooled liquid water and the droplet size. Different aircraft may report the same quantitative conditions as different levels of icing as a result. Dry snow in flight represents a less significant hazard for airframe icing as it usually does not stick. Ice detectors are used to indicate the presence of icing conditions. However, impact icing is likely to form on air intakes and leading edges.