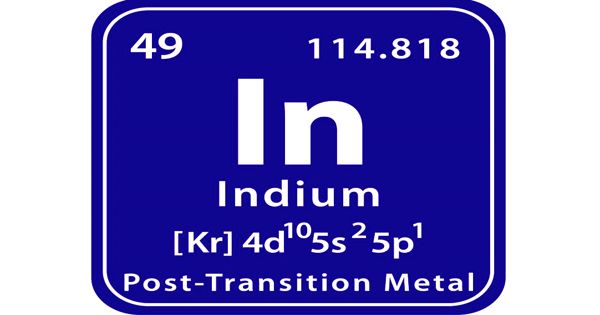 Indium is a chemical element, the rare metal of main Group 13 (IIIa, or boron group) of the periodic table. It is a chemical element with the symbol ‘In’ and atomic number 49. It is a lustrous silvery metal that is so soft and malleable it can be scratched with a fingernail and bent into nearly any shape. Indium is the softest metal that is not an alkali metal. It is an amphoteric element; it dissolves in acids to give indium salts, and it also dissolves in concentrated alkalies to give indates. It is a silvery-white metal that resembles tin in appearance.

Indium is a minor component in zinc sulfide ores and is produced as a byproduct of zinc refinement. It is stable in air and in water but dissolves in acids. It is a post-transition metal that makes up 0.21 parts per million of the Earth’s crust.

In nature, indium is quite rare and nearly always found as a trace element in other minerals — particularly in zinc and lead — from which it is typically obtained as a byproduct. It has a melting point higher than sodium and gallium, but lower than lithium and tin. Chemically, indium is similar to gallium and thallium, and it is largely intermediate between the two in terms of its properties.

Indium is rarely found uncombined in nature and is typically found in zinc, iron, lead, and copper ores. It was discovered in 1863 by Ferdinand Reich and Hieronymous Theodor Richter by spectroscopic methods. Reich and Richter had been looking for traces of the element thallium in samples of zinc ores. They named it for the indigo blue line in its spectrum. Indium is about as abundant as silver but is much easier to recover since it typically occurs along with zinc, iron, lead, and copper ores.

Indium is used to dope germanium to make transistors. It is most notably used in the semiconductor industry, in low-melting-point metal alloys such as solders, in soft-metal high-vacuum seals, and in the production of transparent conductive coatings of indium tin oxide (ITO) on the glass. It is also used to make other electrical components such as rectifiers, thermistors, and photoconductors. Indium is considered a technology-critical element.