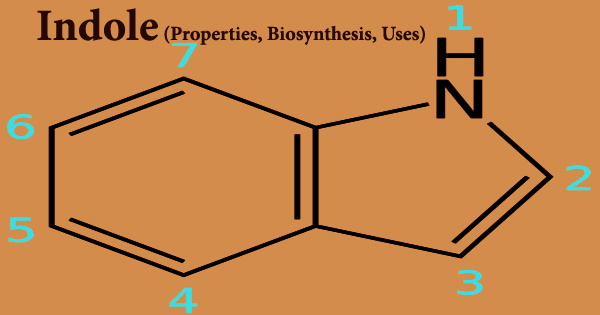 Indole (formula C8H7N), also known as Benzopyrrole, is a heterocyclic chemical molecule found in a variety of floral oils, including jasmine and orange blossom, as well as coal tar and feces. It’s a metabolite produced by Escherichia coli. It’s a 3H-tautomer. indole’s A six-membered benzene ring is fused to a five-membered nitrogen-containing pyrrole ring, giving it a bicyclic structure. Bacteria can generate it as a breakdown product of the amino acid tryptophan.

Indole affects a variety of elements of bacterial physiology as an intercellular signal molecule, including spore production, plasmid stability, drug resistance, biofilm development, and virulence. Indole is found naturally in human feces and has a strong odor. This off-flavor arises in beer as a result of coli form bacteria contamination during the primary fermentation stage of the brewing process. It does, however, have a floral aroma at low concentrations and is a component of many flower smells (such as orange blossoms) and perfumes. Around 2.5 percent of indole is found in natural jasmine oil, which is utilized in the perfume business.

At room temperature, indole is a solid, and it’s utilized to make tryptophan, an important amino acid, and indoleacetic acid (heteroauxin), a hormone that stimulates root growth in plant cuttings. It has a floral odor at low concentrations and is a component of many fragrances; it is also found in coal tar. Because the lone electron pair of nitrogen participates in the aromatic ring, indole is not a base and does not act like a simple amine.

White, flaky crystalline substance with an unpleasant odor at high concentrations that becomes flowery at greater dilutions. Indole has the chemical formula C8H7N and is usually produced from phenylhydrazine and pyruvic acid, however, numerous alternative methods have been identified. The tryptophan-derived tryptamine alkaloids, which include the neurotransmitters serotonin and melatonin, as well as the naturally occurring hallucinogenic substances dimethyltryptamine and psilocybin, include substituted indoles as structural components (and for certain compounds, synthetic precursors).

Indoles are significant precursors for the production of other chemicals in the human body, and as a result, they are studied and employed in a variety of lifestyle and medicinal applications. Because indole was originally extracted by treating indigo dye with oleum, the term indole is a combination of the words indigo and oleum. It’s the gleaming flaky white crystals that, when exposed to light, develop dark hues. With a high concentration of indole, there would be a strong disagreeable stench, but the flavor would transform to oranges and jasmine after being heavily diluted.

The indole molecular structure may be found in a variety of plant and animal substances, including tryptophan, indigo, and indoleacetic acid. Insoluble in mineral oil and glycerol; soluble in fixed oils. It has a melting point of 52~53 degrees Celsius and a boiling temperature of 253~254 degrees Celsius. Alcohol, ether, hot water, propylene glycol, petroleum ether, and most non-volatile oils are soluble; glycerin and mineral oil are insoluble.

Indole is made from anthranilate in the shikimate pathway. It is a step in the biosynthesis of tryptophan that occurs between the elimination of 3-phospho-glyceraldehyde and the condensation with serine inside the tryptophan synthase molecule. 6-Hydroxyindole, Indoxyl, and Oxindole are some of the recognized human metabolites of Indole. Neroli oil, orange oil, lemon oil, lime oil, citrus oil, peel oil, jasmine oil, and other essential oils all contain natural indole.

Indole is a flavoring ingredient that comes in the form of a flaky, crystalline white powder. When concentrated, it has a disagreeable odor, but when diluted, it has a floral odor. Glycerin and mineral oil are insoluble in it. It is soluble in most fixed oils and propylene glycol but not in glycerin. It’s made by a protein’s breakdown. Indole affects a variety of elements of bacterial physiology as an intercellular signal molecule, including spore production, plasmid stability, drug resistance, biofilm development, and virulence.

Indole can be used as a reagent for determining nitrate levels, as well as in the production of perfumes and medicines. It can be utilized in perfumes, medicines, and plant growth hormones as a basic ingredient. In exceedingly dilute solutions, it is a colorless solid with a pleasant smell. Indole is mostly utilized in spices, colors, amino acids, and pesticide raw materials. Indole is a spice that is often used to make jasmine, lilac, lotus flowers, orchids, and other floral essences. The use is usually in tenths of a percent.