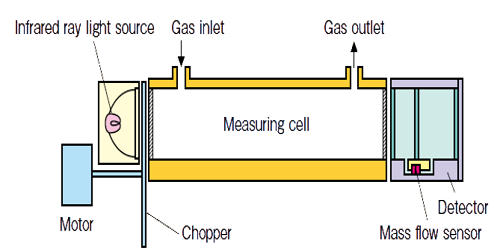 An infrared gas analyzer is used to measure the quantity of various gas. An infrared gas analyzer measures trace gases by determining the absorption of an emitted infrared light source through a certain air sample. Trace gases found in the Earth’s atmosphere get excited under specific wavelengths found in the infrared range. The concept behind the technology can be understood as testing how much of the light is absorbed by the air. Different molecules in the air absorb different frequencies of light. Air with lots of a certain gas will absorb more of a certain frequency, allowing the sensor to report a high concentration of the corresponding molecule.

Infrared gas analyzers usually have two chambers, one is a reference chamber while the other chamber is a measurement chamber. The amount of gas is determined by the amount of a particular frequency of light absorbed by the gas when the light is passed through the gas. Infrared light is emitted from some type of source on one end of the chamber, passes through a series of chambers that contain given quantities of the various gases in question.  Different molecules in the air absorb different frequencies of light, measuring the absorbed frequency clearly gives the relation to the amount of particular gas in the air. 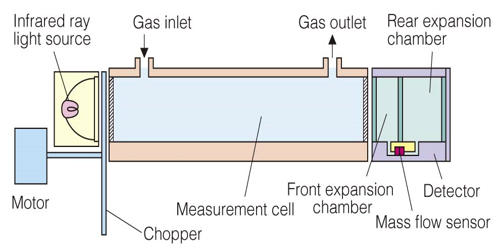 The absorption spectrum of infrared radiation absorbed by gas is unique to the type of gas, In every absorption-type, optical analyzer, the fundamental equation relating photon absorption to substance concentration is the Beer-Lambert Law (sometimes called the Lambert-Beer Law).

The amount of infrared ray absorbed in the measurement cell is detected with a mass flow sensor. The low impedance sensor has high noise immunity. The sensor with no movable parts has a high resistance to vibration and thus can be used semi-permanently. Infrared ray absorption by measured gas component is converted into electric signals.

The invention of 1975 has as many detectors as the number of gases to be measured. Each detector has 2 chambers which both have an optically aligned infrared source and detector, and are both filled with one of the gases in the sample of air to be analyzed. Lying in the optical path are two cells with transparent ends. One contains a reference gas and one will contain the gas to be analyzed. Between the infrared source and the cells is a modulator which interrupts the beams of energy.

There are two tubes in the analyzer one is filled with reference gas and other with the sample gas or process gas which absorbs light. The reference gas is usually gassed like nitrogen which will not absorb light. The output from each detector is combined with the output from any other detector which is measuring a signal opposite to the principal signal of each detector. The amount of signal from other detectors is the amount that will offset the proportion of the total signal that corresponds to the interference. This interference is from gases with a principal lower absorption band that is the same as the principal band of the gas being measured.