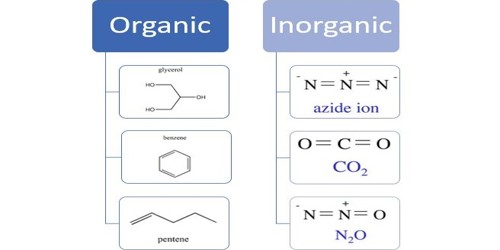 The division between the two types of a compound is not absolute. Since many inorganic compounds contain some type of metal (alkali, alkaline, transition, etc.), they tend to be able to conduct electricity. Some carbon-containing compounds are traditionally considered inorganic. Many chemicals in nature are not compounds but are ions. They are often quite simple, as they do not form the complex molecular bonds that carbon makes possible. Sodium, chloride, and phosphate ions are essential for life, as are some inorganic molecules such as nitrogen, carbon dioxide, water, and oxygen. Aside from these simple ions and molecules, virtually all compounds covered by biochemistry contain carbon and can be considered organic or organometallic.

Major types of inorganic compounds may include: