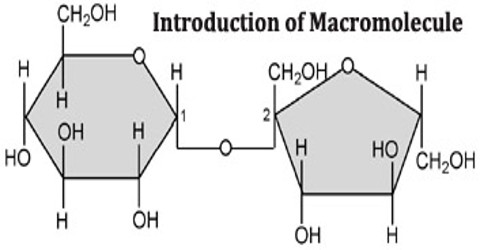 A macromolecule is a molecule with a very large number of atoms. Macromolecules typically have more than 100 component atoms. It is a very large molecule, such as protein, commonly created by polymerization of smaller subunits. It was coined by Nobel laureate Hermann Staudinger in the 1920s, although his first relevant publication on this field only mentions high molecular compounds (in excess of 1,000 atoms). The most common macromolecules in biochemistry are biopolymers (nucleic acids, proteins, carbohydrates and polyphenols) and large non-polymeric molecules, such as lipids and macrocycles. Synthetic macromolecules include common plastics and synthetic fibres as well as experimental materials such as carbon nanotubes. The four types of macromolecules are nucleic acids, proteins, carbohydrates and lipids. These macromolecules are large molecules that make up most of the bodies of living things. They consist of chains of repeating units, which are known as polymers. These four molecules make up the bulk of living bodies, and each plays an essential role in regulating the body’s chemistry. Carbohydrates are the starches and sugars that bodies use for energy. Brains, for example, consume large amounts of glucose with consumption rising in areas of the brain that are the most active. Lipids help the body store the energy it needs in the form of fats and oils. Wax, of the type secreted by honeybees, is another form of lipid. Proteins are the workhorses of the body’s machinery. Proteins carry out specific functions inside cells, and they act as enzymes to catalyze reactions all over the body. Amylase, lactase and pepsin are all proteins used in digestion, for example. Proteins are typically large molecules that can be built up from chains of amino acids called polypeptides. Nucleic acids are central to the function of living cells. Arranged in a linear sequence within DNA, they code for the structure and function of the body’s proteins. Nucleic acids also form RNA, which acts to transmit DNA-based instructions to the cellular machinery. A limited number of subunits are involved.

The subunits may be identical or they may be different.

Subunit interaction is entirely noncovalent between complementary regions on the subunit surface.

If covalent links exist (such as disulfide bridges) then the structure is not considered quaternary. In proteins with quaternary structure the deaggregated subunits alone are generally biologically inactive. In addition to the very important biologic macromolecules (proteins, lipids, polysaccharides, and nucleic acids), there are three major groups of macromolecules that are important in industry.

Elastomers are macromolecules that are stretchy and very flexible. This elastic property allows these materials to be used in products like elastic waistbands and hair bands. These products can be stretched, but they return to their original structure. A natural, non-manmade, elastomer is rubber. Fiber macromolecules are string-like, which when woven together are very durable. Natural fibers include silk, cotton, wool, and wood.

There are many types of plastics, but all of them are made through a process called polymerization, the joining of monomer units to form the plastic polymers. Until recently, all plastics were made from petroleum products. There is a new group of plastics, called bioplastics, which have the advantage of using renewable resources for their manufacturing. Bioplastics, unlike traditional plastics, can break down, or degrade, which make them safer for the environment. Environmentally conscious individuals take care to recycle plastic materials. There are no naturally occurring plastics.