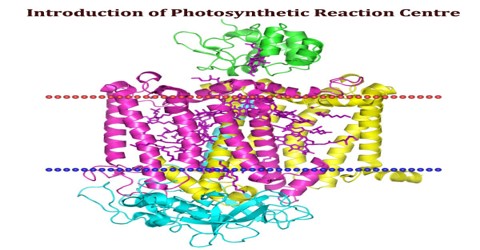 The Photosynthetic Reaction Centre is a protein that is the site of the light reactions of photosynthesis. Photosynthesis is initiated by a series of photochemical reactions in which light energy absorbed by chlorophylls is converted into redox energy that can be used to power a series of metabolic reactions. The reactions of light absorption in photosynthetic organisms can be divided into two separate processes. The reaction centre contains pigments such as chlorophyll and phaeophytin.

The photosynthetic reaction centers found in photosystems I and II of oxygenic organisms (cyanobacteria, red and green algae, higher plants), and in the photosynthetic bacteria that contain a single photosystem, are multisubunit membrane protein complexes that function as remarkable photochemical devices. A reaction centre is laid out in such a way that it captures the energy of a photon using pigment molecules and turns it into a usable form. Once the light energy has been absorbed directly by the pigment molecules, or passed to them by resonance transfer from antenna pigments, they release two electrons into an electron transport chain.

Light is made up of small bundles of energy called photons. If a photon with the right amount of energy hits an electron it will raise the electron to a higher energy level. Electrons are most stable at their lowest energy level or ground state, the orbit in which the electron has the least amount of energy. Electrons in higher energy levels can return to ground state in a manner analogous to a ball falling down a staircase. In doing so they release energy. This is the process which is exploited by a photosynthetic reaction centre.

When an electron rises to a higher energy level, there is a corresponding decrease in the reduction potential of the molecule in which the electron resides occurs. This means that the molecule has a greater tendency to donate electrons, which is key to the conversion of light energy to chemical energy. In green plants, the electron transport chain has many electron acceptors including phaeophytin, quinone, plastoquinone, cytochrome bf, and ferredoxin, which result finally in the reduced molecule NADPH and the storage of energy. The passage of the electron through the electron transport chain also results in the pumping of protons (hydrogen ions) from the chloroplast’s stroma and into the lumen, resulting in a proton gradient across the thylakoid membrane that can be used to synthesise ATP using the ATP synthase molecule. Both the ATP and NADPH are used in the Calvin cycle to fix carbon dioxide into triose sugars. Structure and Function of the Photosynthetic Reaction Center

The three-dimensional structure of the photosynthetic reaction center from Rhodobacter sphaeroides is described. The reaction center is a transmembrane protein that converts light into chemical energy. The protein has three subunits: L, M, and H (Low, Medium, and High). The mostly helical L and M subunits provide the scaffolding and the finely tuned environment in which the chromophores carry out electron transfer. The details of the protein-chromophore interactions are from studies of a trigonal crystal form that diffracted to 2.65-A resolution. Functional studies of the multi-subunit complex by site-specific replacement of key amino acid residues are summarized in the context of the molecular structure. The details about reaction center structure that were obtained from crystals of bacterial reaction centers provided the basis for theoretical models of the reaction center of photosystem II (PSII). Efforts to purify this reaction center showed that the cofactors were associated with a pair of proteins of similar amino acid sequences, called “D1” and “D2” on account of their diffuse appearance on SDS-polyacrylamide gels. A pair of small, membrane spanning polypeptides were also present that ligate the heme of a cytochrome, b559, whose function is still unclear. The number of chlorophyll a molecules in such a preparation was higher (six, rather than four as in bacteria), but two pheophytin a molecules were present, and a pair of plastoquinones were known to be present in this reaction center. The Photosystem I Reaction Center

Biochemically-purified preparations of PSI reaction centers contain about 100 molecules of chlorophyll a. The reaction center chlorophyll in this photosystem, called P700 after the wavelength where absorption of a photon causes bleaching of absorbance, was proposed to be a dimer of chlorophylls based on the optical properties of synthetic chlorophyll dimers. When high resolution X-ray structures from PSI crystals from T. elongatus and from a higher plant became available, one was confronted with a large number of chlorophyll a molecules. Nevertheless, it was relatively easy to locate the position of the chlorophyll a dimer, other chlorophyll a species, the phylloquinones and the Fe/S clusters that make up the cofactors for charge separation in this reaction center.