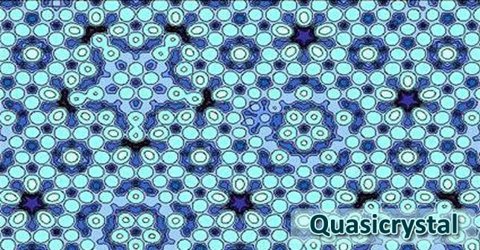 In classical crystallography a crystal is defined as a three dimensional periodic arrangement of atoms with translational periodicity along its three principal axes. Thus it is possible to obtain an infinitely extended crystal structure by aligning building blocks called unit-cells until the space is filled up. Since quasicrystals lost periodicity in at least one dimension it is not possible to describe them in 3D-space as easily as normal crystal structures. Thus it becomes more difficult to find mathematical formalisms for the interpretation and analysis of diffraction data. For normal crystals we can assign three integer values (Miller indices) to label the observable reflections. This is due to the three-dimensional translational periodicity of the structure.

In 1982 materials scientist Dan Shechtman observed that certain aluminium-manganese alloys produced the unusual diffractograms which today are seen as revelatory of quasicrystal structures. Due to fear of the scientific community’s reaction, it took him two years to publish the results for which he was awarded the Nobel Prize in Chemistry in 2011. Intermetallic quasicrystals are typically hard and brittle materials with unusual transport properties and very low surface energies. Thermal and electronic transport in solid materials is normally enhanced by phonons and Bloch waves that develop as a consequence of the periodic nature of crystals. In quasicrystals, the absence of such collective transport modes generates behaviors more like those found in glasses than in normal crystals. The low surface energy of quasicrystals make them corrosion- and adhesion-resistant and imparts them with low friction coefficients.

Mathematically, quasicrystals have been shown to be derivable from a general method that treats them as projections of a higher-dimensional lattice. Just as circles, ellipses, and hyperbolic curves in the plane can be obtained as sections from a three-dimensional double cone, so too various (aperiodic or periodic) arrangements in two and three dimensions can be obtained from postulated hyperlattices with four or more dimensions. Icosahedral quasicrystals in three dimensions were projected from a six-dimensional hypercubic lattice by Peter Kramer and Roberto Neri in 1984. The tiling is formed by two tiles with rhombohedral shape. In 1972 de Wolf and van Aalst reported that the diffraction pattern produced by a crystal of sodium carbonate cannot be labeled with three indices but needed one more, which implied that the underlying structure had four dimensions in reciprocal space. Other puzzling cases have been reported, but until the concept of quasicrystal came to be established, they were explained away or denied. However, at the end of the 1980s the idea became acceptable, and in 1992 the International Union of Crystallography altered its definition of a crystal, broadening it as a result of Shechtman’s findings, reducing it to the ability to produce a clear-cut diffraction pattern and acknowledging the possibility of the ordering to be either periodic or aperiodic.

In order to elucidate this concept with a simple example lets have a look at a 1D-“quasicrystal” in form of a Fibonacci chain, which is a quasiperiodic sequence of short (red) and long (green) segments. We embed this 1D-“quasicrystal” in a 2D-“higher dimensional space” which in this case has the form of a simple square lattice. One unit cell of the higher-dimensional space is filled yellow. The axes show the orientation of the two orthonormal subspaces Ve, Vi. The slope of Ve with respect to the 2D-lattice has to be an irrational one. In this case it is tau=1.618… The left image demonstrates the projection method, where we have a strip of projection with finite width. All points of the 2D-lattice inside this strip are projected onto the external space Ve, thus giving the quasiperiodic sequence (red,green..). The right image shows the section method in which a hyperplane (here a 1D-line) that is parallel to Ve cuts the higher-dimensional space. The occupation domains that are attached to each of the lattice points (here: bars) intersect with the hyperplane (here: line) thus producing the same quasiperiodic sequence as in the left picture. These occupation domains (here: bars) extend parallel to the internal space Vi. We can generalize this to nD cases with n=5,6,.. In that case the internal space would be (n-3)-dimensional and the occupation domains would be two-dimensional (eg.polygons) or three-dimensional (eg. polyhedra). An application was the use of low-friction Al-Cu-Fe-Cr quasicrystals as a coating for frying pans. Food did not stick to it as much as to stainless steel making the pan moderately non-stick and easy to clean; heat transfer and durability were better than PTFE non-stick cookware and the pan was free from perfluorooctanoic acid (PFOA); the surface was very hard, claimed to be ten times harder than stainless steel, and not harmed by metal utensils or cleaning in a dishwasher; and the pan could withstand temperatures of 1,000 °C (1,800 °F) without harm. However, cooking with a lot of salt would etch the quasicrystalline coating used, and the pans were eventually withdrawn from production.

Other potential applications include selective solar absorbers for power conversion, broad-wavelength reflectors, and bone repair and prostheses applications where biocompatibility, low friction and corrosion resistance are required. Magnetron sputtering can be readily applied to other stable quasicrystalline alloys such as Al-Pd-Mn.

While saying that the discovery of icosahedrite, the first quasicrystal found in nature, was important, Shechtman saw no practical applications.