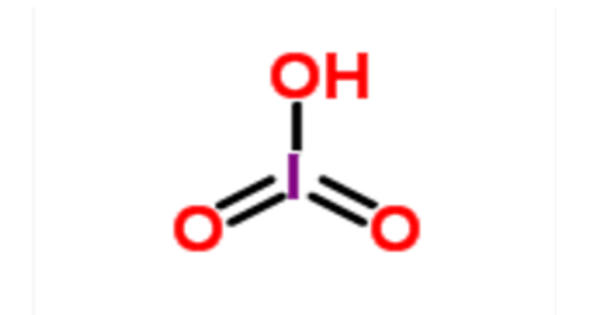 Iodic acid (HIO3) is an iodine oxoacid. It is a white water-soluble solid. It has a role as an astringent. Its robustness contrasts with the instability of chloric acid and bromic acid. It is the conjugate acid of an iodate. It is also known as monoiodic acid, trioxoiodic acid, hydrogen trioxoiodate, hydroxidodioxidoiodine, and iodic(V) acid.

Iodic acid is soluble in water and also exists in a pure state. It can be produced by oxidizing iodine I2 with strong oxidizers such as nitric acid HNO3, chlorine Cl2, chloric acid HClO3 or hydrogen peroxide H2O2, for example:

Iodic acid can be obtained by oxidizing iodine with strong oxidizers like nitric acid, hydrogen peroxide, chloric acid and chlorine.

Iodic acid is a relatively strong acid with a pKa of 0.75. It is strongly oxidizing in acidic solution, less so in basic solution. When iodic acid acts as oxidizer, then the product of the reaction is either iodine, or iodide ion. Under some special conditions, iodic acid is reduced to iodine trichloride, a golden yellow compound in solution and no further reduction occurs.