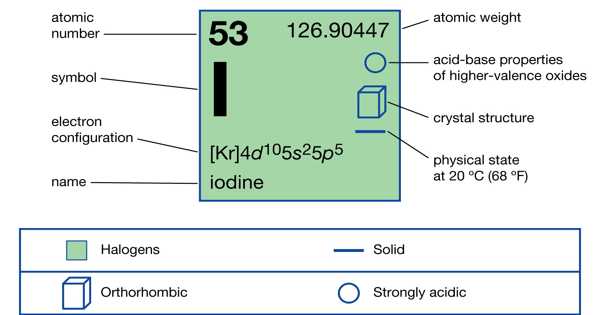 Iodine is a chemical element with the atomic number 53 and the symbol I. It is a naturally occurring element that can be found in seawater as well as certain rocks and sediments. At standard conditions, it exists as a lustrous, purple-black non-metallic solid that melts to form a deep violet liquid at 114 degrees Celsius and boils to form a violet gas at 184 degrees Celsius. Iodine comes in both non-radioactive and radioactive forms. However, it easily sublimes with gentle heat, leading to the widespread misconception that it does not melt at standard pressure, which is even taught in some science textbooks.

Iodine is the least reactive and most electropositive of halogens, which means it tends to lose electrons and form positive ions during chemical reactions. It is also the least abundant and heaviest of stable halogens. Iodine has 30 known isotopes, but only one occurs naturally (I-127).

At room temperature, iodine is a nonmetallic, nearly black solid with a glittering crystalline appearance. The molecular lattice is made up of discrete diatomic molecules, which can also be found in the molten and gaseous states. Dissociation into iodine atoms becomes noticeable above 700 °C (1,300 °F).

Iodine occurs in many oxidation states, including iodide (I−), iodate (IO−3), and the various periodate anions. It is never found in nature uncombined, and it is not concentrated sufficiently to form independent minerals. It is the least abundant of the stable halogens, being the sixty-first most abundant element. It is the heaviest essential mineral nutrient.

It is present in seawater, but sparingly, as the iodide ion, I−, to the extent of approximately 50 mg per metric ton (0.0016 ounces per ton) of seawater.

Iodine is required for the production of thyroid hormones. It is best known for its critical role in thyroid hormone production in humans and all vertebrates. It is used in medical tests as well as in the treatment of certain diseases. Iodine deficiency affects approximately two billion people worldwide and is the leading preventable cause of intellectual disability.

Iodine is used as a disinfectant to clean surfaces and storage containers, as well as in skin soaps and bandages and for water purification. Antiseptics, germicides (products that kill germs), and other medical applications make use of it. It does, however, have a plethora of other less common but important commercial applications.