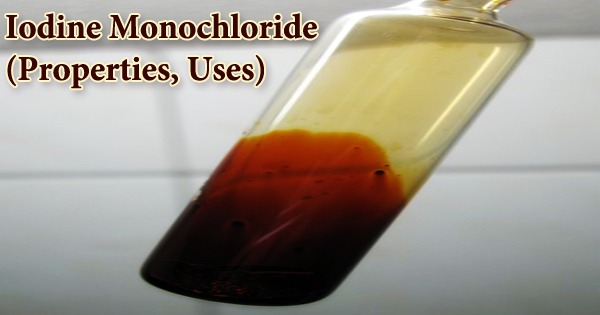 Iodine monochloride is a pungent-smelling black crystal or a reddish-brown oily liquid. It is an interhalogen compound with the formula ICl; this molecule is strongly polar and acts as a source of I+ due to the difference in electronegativity of iodine and chlorine. It is made by reacting astoichiometric amounts of solid iodine with liquid or dry chlorine. Bypassing chlorine gas through an iodine suspension in moderately strong hydrochloric acid, aqueous solutions of ICl can be produced:

The halogens are combined in a 1:1 molar ratio to produce iodine monochloride, according to the equation: I2 + Cl2 → 2 ICl. Iodine monochloride can also be generated by oxidizing iodine with iodic acid in a strong hydrochloric acid solution.:

The brown vapor of iodine monochloride is produced when chlorine gas is passed through iodine crystals. The liquid iodine monochloride is dark brown in color and has a melting point of 27°C (alpha form) or 14°C (beta form) (beta form). Alcohol, ether, CS2, acetic acid, acetone, and pyridine are all soluble in it, and it hydrolyzes to HCl and IOH in water. As ICl comes into contact with potassium metal, it explodes, then combines with sodium metal and will explode if it is impacted. It has a rather exothermic reaction with PCl3.

When heated, iodine monochloride is moderately explosive. Rubber and a variety of organic materials react with it. Aluminum foil enflames (after a period of delay). In a reversible reaction, excess chlorine transforms iodine monochloride to iodine trichloride:

The molecules in both polymorphs’ crystal structures are arranged in zigzag chains. β-ICl has the space group P21/c and is monoclinic. It’s simple to make by mixing an aqueous potassium iodate solution with potassium iodate dissolved in concentrated HCl in a closed vessel to prevent chlorine loss. The skin is extremely corrosive to iodine monochloride. Burns and dark spots result from contact with the skin. Immediately wash with 15-20 percent HCl if any one come into contact with it. Vapors irritate the skin, eyes, and mucous membranes; when taken orally, the compound is mild to extremely toxic.

In organic synthesis, ICl is a valuable reagent. In the synthesis of some aromatic iodides, it is used as a source of electrophilic iodine. C–Si bonds are also cleaved by it. The material itself is non-combustible, but it can decompose when heated, producing corrosive and/or toxic fumes. Iodine monochloride is a topical anti-infective that is used to measure the iodine values in fats and oils. The Wijs solution, which consists of iodine monochloride dissolved in acetic acid, is used to calculate a substance’s iodine content.

Purify it by fractional crystallization from its melt at low temperatures over and over again. The black crystals turn into a reddish-brown liquid as they melt. By reacting with a chlorate, it can also be used to make iodates. As a byproduct, chlorine is published. Lewis acids such as dimethylacetamide and benzene form 1:1 adducts with iodine monochloride, which is a Lewis acid.