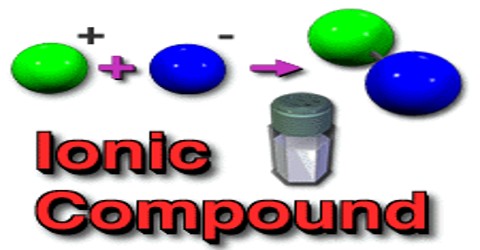 Ionic compound is a compound formed by ions bonding together through electrostatic forces. Ionic compounds are also known as electrically neutral compounds: that is the number of positively charged ions and the number of negatively charged ions or electrons is equal. They are consist of ions of opposite charges and held together by strong electrostatic forces of attraction. Ionic compounds are generally formed from metal and a non-metal element. Individual ions within an ionic compound usually have multiple nearest neighbours, so are not considered to be part of molecules, but instead part of a continuous three-dimensional network, usually in a crystalline structure. Ionic compounds can also be produced from their constituent ions by evaporation of their solvent, precipitation, freezing, a solid-state reaction, or the electron transfer reaction of reactive metals with reactive non-metals, such as halogen gases.

Many of the ionic compounds are formed from just two elements, so it was called as binary compounds. For binary compounds, metal cation is present as first element followed by the nonmetallic anion. For example, silver chloride (AgCl), the anion is named by taking the first part of the elements name (chloride) and by adding “-ide”. Potassium bromide (KBr), zinc iodide (ZnI2), and aluminum oxide are all examples for binary compounds.

The main principle to remember is that ions are completely different in physical and chemical properties from the neutral atoms of the element. The notation of the + and – charges on ions is very important as it conveys a definite meaning. Whereas elements are neutral in charge, IONS have either a positive or negative charge depending upon whether there is an excess of protons (positive ion) or excess of electrons (negative ion). Ionic compounds are special because they form lattice or crystalline structures. This formation comes from the ionic bonds that hold the ions together in the compound. Ionic bonds are very strong, which makes them difficult to break apart. The lattice energy is the summation of the interaction of all sites with all other sites. For unpolarizable spherical ions only the charges and distances are required to determine the electrostatic interaction energy. For any particular ideal crystal structure, all distances are geometrically related to the smallest internuclear distance.

The Sphalerite structure is is the structure adopted by Zinc Sulphide, ZnS, and is also known as the zinc blende structure. The cations are tetrahedrally coordinated by anions, and the anions are surrounded by eight tetrahedral sites, of which half are occupied, and hence the anions are also four-coordinate. Using an even simpler approximation of the ions as impenetrable hard spheres, the arrangement of anions in these systems are often related to close-packed arrangements of spheres, with the cations occupying tetrahedral or octahedral interstices. Depending on the stoichiometry of the ionic compound, and the coordination, principally determined by the radius ratio of cations and anions, a variety of structures are commonly observed, and theoretically rationalized by Pauling’s rules.

Ionic compounds usually exist in the of crystalline solids. It has been shown by X-ray analysis ionic compounds that they do not exist as independent molecules but exist in the form of ions. Ionic compounds are also known as salts and can be formed by acid–base reactions. If the compound is the result of a reaction between a strong acid and a weak base, the result is an acidic salt. There are some properties that are shown by ionic compounds. These are:

Most ionic compounds are very brittle. Once they reach the limit of their strength, they cannot deform mealleably, because the strict alignment of positive and negative ions must be maintained. Instead the material undergoes fracture via cleavage. As the temperature is elevated a ductile–brittle transition occurs, and plastic flow becomes possible by the motion of dislocations.