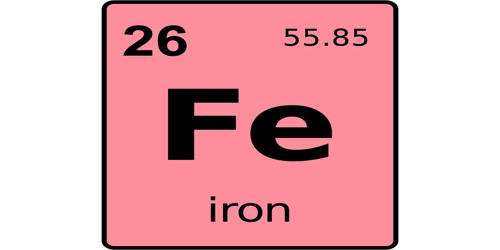 Iron (Fe) is a chemical element, the metal of Group 8 (VIIIb) of the periodic table, the most-used, and cheapest metal. It is a chemical element with symbol Fe, and atomic number 26. It is a metal that belongs to the first transition series and group 8 of the periodic table. It is by mass the most common element on Earth, forming much of Earth’s outer and inner core. It is the fourth most common element in the Earth’s crust and is second in abundance to aluminum among the metals and fourth in abundance behind oxygen, silicon, and aluminum among the elements. It is most valuable not as a pure metal, but in alloys. An alloy is made by melting and mixing two or more metals.

Iron, as commonly available, nearly always contains small amounts of carbon, which are picked up from the coke during smelting. In its metallic state, iron is rare in the Earth’s crust, limited mainly to deposition by meteorites. Iron normally does not occur as a free element in the earth. In fact, iron was not of much value to humans until they learned how to free iron from its compounds. Iron ores, by contrast, are among the most abundant in the Earth’s crust, although extracting usable metal from them requires kilns or furnaces capable of reaching 1,500 °C (2,730 °F) or higher, about 500 °C (900 °F) higher than what is enough to smelt copper. The melting point of pure iron is 1,536°C (2,797°F) and its boiling point is about 3,000°C (5,400°F).
The melting point, boiling point, and other physical properties of steel alloys may be quite different from those of pure iron.
Iron is an essential element for all forms of life and is non-toxic. The average human contains about 4 grams of iron.

Humans started to master that process in Eurasia only about 2000 BCE, and the use of iron tools and weapons began to displace copper alloys, in some regions, only around 1200 BCE. It is a very active metal. It readily combines with oxygen in moist air. That event is considered the transition from the Bronze Age to the Iron Age. In the modern world, iron alloys, such as steel, inox, cast iron, and special steels are by far the most common industrial metals, because of their mechanical properties and low cost.

Iron is the most used of all the metals, comprising 95 percent of all the metal tonnage produced worldwide. 90% of all metal that is refined today is iron. Most are used to manufacture steel, used in civil engineering (reinforced concrete, girders, etc) and in manufacturing. Its combination of low cost and high strength make it indispensable, especially in applications like automobiles, the hulls of large ships, and structural components for buildings. The largest iron resources in the world are in China, Russia, Brazil, Canada, Australia, and India. The largest producers of iron from ore in the world are China, Japan, the United States, Russia, Germany, and Brazil.
Share !
Facebook Twitter WhatsApp LinkedIn Pin It Email