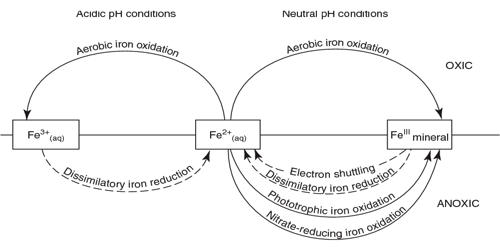 Iron is an important limiting nutrient for plants, which use it to produce chlorophyll. The iron cycle (Fe) is the biogeochemical cycle that couples the oxidation and reduction reactions of iron, a key element for life. Iron is typically released into the soil or into the ocean through the weathering of rocks or through volcanic eruptions. The iron cycle is the biogeochemical cycle of iron through the atmosphere, hydrosphere, biosphere, and lithosphere. While Fe is highly abundant in the Earth’s crust, it is less common in oxygenated surface waters. Iron is a key micronutrient in primary productivity, and a limiting nutrient in the Southern ocean, eastern equatorial Pacific, and the subarctic Pacific referred to as High-Nutrient, Low-Chlorophyll (HNLC) regions of the ocean. Iron fertilization was thought to be a possible method for removing the excess CO2 responsible for climate change.

Iron exists in a range of oxidation states from -2 to +7; however, on Earth, it is predominantly in its +2 or +3 redox state and is a primary redox-active metal on Earth. Iron is then assimilated by consumers when they eat the bacteria or plankton. The cycling of iron between its +2 and +3 oxidation states is referred to as the iron cycle. On the Earth’s surface and in its crust, iron exists in two oxidation states, ferrous (Fe2+) and ferric (Fe3+) iron. This process can be entirely abiotic or facilitated by microorganisms, especially iron-oxidizing bacteria. The oxidation of ferrous iron can be produced both chemically and biologically through chemolithotrophy. The abiotic processes include the rusting of iron-bearing metals, where Fe2+ is abiotically oxidized to Fe3+ in the presence of oxygen, and the reduction of Fe3+ to Fe2+ by iron-sulfide minerals. Ferric iron precipitates at neutral and alkaline pH as ferric hydroxide. The biological cycling of Fe2+ is done by iron-oxidizing and reducing microbes. The marine iron cycle is very similar to the terrestrial iron cycle, except that phytoplankton and cyanobacteria assimilate iron.

Iron is an essential micronutrient for almost every life form. Photosynthesis depends on adequate iron supply. Plants assimilate iron from the soil into their roots. It is a key component of hemoglobin, important to nitrogen fixation as part of the Nitrogenase enzyme family, and as part of the iron-sulfur core of ferredoxin, it facilitates electron transport in chloroplasts, eukaryotic mitochondria, and bacteria. Animals consume plants and use the iron to produce hemoglobin, the oxygen transports protein found in red blood cells. Due to the high reactivity of Fe2+ with oxygen and low solubility of Fe3+, iron is a limiting nutrient in most regions of the world. When animals die, decomposing bacteria return the iron to the soil. The iron cycle is closely coupled to carbon, sulfur, nitrogen, phosphorus, and manganese cycles.