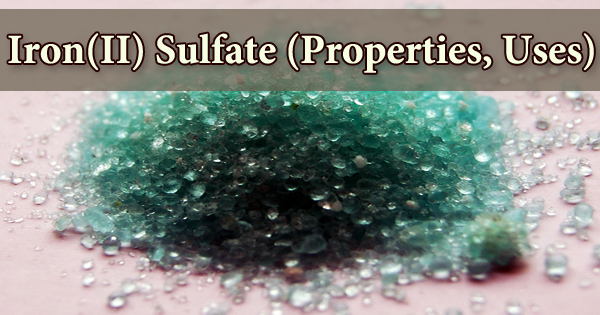 Iron(II) sulfate, also known as ferrous sulfat (British English: iron(II) sulphate), is a greenish or yellow-brown crystalline solid. 15.0 pound per gallon density At 64°C, it melts and at 90°C, it loses its seven hydration fluids. It refers to a group of salts that have the formula FeSO4•xH2O. The heptahydrate (x = 7) is the most frequent form of these compounds, although they are also known for other x values. The major hazard is the harm to the environment, and prompt measures should be made to prevent it from spreading.

The heptahydrate crystallizes into green monoclinic crystals with a density of 1•88 and is extremely water-soluble (296 g litre-1 FeS04 at 25°C). The hydrated form is used to treat iron deficiency in both medical and industrial settings. The blue-green heptahydrate (hydrate containing 7 molecules of water) is the most prevalent form of this substance, which has been known as copperas and green vitriol (vitriol is an old term for sulfate). The white monohydrate is produced by precipitating the aqueous solution with ethanol, heating the heptahydrate to 140° in vacuo, or crystallizing it from 50 percent sulphuric acid. This can be further dehydrated to the white, amorphous FeSO4 by heating to 300° in a current of hydrogen.

Iron is an important heavy metal included in many over-the-counter multivitamin and mineral supplements, as well as being used therapeutically to cure or prevent iron deficiency anemia at larger dosages. Ferrous sulfate is a fine or lumpy solid with a greenish or yellowish color. All of the iron(II) sulfates dissolve in water to form the identical aquo complex (Fe(H2O)6)2+, which is paramagnetic and has an octahedral molecular geometry.

The word copperas comes from the time when copper(II) sulfate was known as blue copperas, and iron(II) and zinc sulfate were known as green and white copperas, respectively. Heptahydrate is a bluish-green monoclinic crystal with a refractive index of 1.47, a hardness of 2 Mohs, and a density of 1.89g/cm上3; it decomposes at 60°C and is highly soluble in water, pure methanol, and ethanol.

It is on the WHO’s List of Essential Medications, which includes the safest and most effective medicines required in a health system. Iron has little or no impact on the liver when consumed at the recommended daily intake or at replacement levels. Iron produces significant toxicities in large amounts and deliberate or unintentional overdoses, one of which is acute liver injury.

Mineral formations such as pyrite, marcasite, chalcopyrite, and others can be found in oxidation zones of iron-bearing ore beds. They can also be found in similar settings, such as coal fires. Many dehydrate quickly and, in certain cases, oxidize. White orthorhombic crystal with a hygroscopic density of 3.65 g/cm3 and water solubility of 26.6 g/100 g water at 20°C. The monohydrate is a yellowish-white monoclinic crystal with a density of 3.0 g/cm3 and a decomposition temperature of 300°C. It is water-soluble. Sulfuric acid pickling baths are used to finish steel sheets or rods prior to plating or coating. As a by-product of this process, significant amounts of iron(II) sulfate are produced.

The sulfate process, which produces titanium dioxide from ilmenite, is another major source of significant quantities. Commercially, ferrous sulfate is made by oxidizing pyrite:

Iron(II) sulfate is the most significant iron(II) salt and the most well-known iron(II) compound. The substance is employed as a dye mordant, a component of writing ink, in electroplating baths, in radiation dosimeters, in lithography and engraving, as a weed-killer, and in water purification. It is made by removing metals that are less reactive than Iron from sulfate solutions:

The heptahydrate, which loses water to produce the tetrahydrate at 57°C and the monohydrate at 65°C, is the most frequent hydrate found in nature. Iron(II) sulfate loses its water of crystallization when heated, and the original green crystals become a white anhydrous solid. The anhydrous substance releases sulfur dioxide when heated further, leaving a reddish-brown iron(III) oxide.

Ferrous sulfate oxidizes quickly in damp air and becomes covered with brownish-yellow ferric sulfate. The addition of alkali or exposure to light accelerates the oxidation process. The production of various iron(II) salts, such as Prussian blue or ferric ferrocyanide, is a prominent use of this chemical. In addition to being a reducing agent, iron(II) sulfate is employed as an analytical reagent (in brown ring test for nitrate). It emits hazardous sulfur oxide fumes when heated to breakdown.

Iron(II) sulfate is an iron-containing nutrient and dietary supplement. It’s an odorless white to grey powder. Heptahydrate ferrous sulfate has around 20% iron, whereas ferrous sulfate dried contains approximately 32% iron. Iron(II) sulfate, like other iron(II) salts, is a reducing agent. It takes a long time to dissolve in water and has a high bioavailability. It has the potential to produce discoloration and rancidity. It’s added to baking mixes to make them more nutritious. It does not react with lipids in cereal flours when encapsulated. It can be found in baby meals, cereals, and pasta.