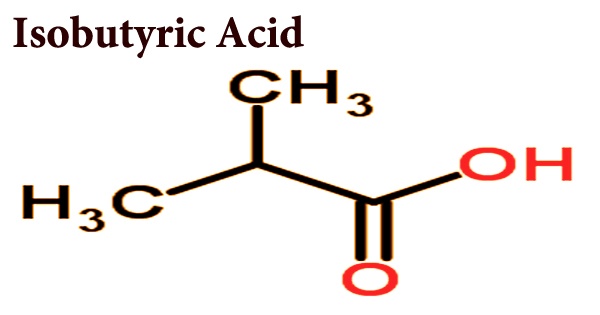 Isobutyric acid, also known as 2-methylpropanoic acid or isobutanoic acid, is a colorless liquid with a faint rancid butter odor that is corrosive to tissues and metals. It is a carboxylic acid with a structural formula (CH3)2CHCOOH; it is an isomer of n-butyric acid. Isobutyric acid is a branched propanoic acid fatty acid that bears a C-2 methyl branch. As a volatile oil component, it has a function as a plant metabolite and a metabolite of Daphnia Magna. It has an odor and taste similar to that of n-butyric acid, prepared by isobutyl alcohol oxidation. It is known as a short-chain fatty acid; derivatives called isobutyrates are given by deprotonation or esterification.

For the synthesis of isobutyric acid esters, such as methyl isobutyrate, propyl ester, isoamyl ester and benzyl ester, isobutyric acid is primarily used. It can also be used in pharmaceutical products and as an edible flavor. It is a colorless liquid with an odor which is very unpleasant; it is soluble in organic solvents and water. It is naturally present in carobs (Ceratonia siliqua), in vanilla, and in Arnica dulcis root, and in croton oil as an ethyl ester. Isobutyric acid has a strong, penetrating smell of rancid butter. The smell and taste are equivalent to n-butyric acid.

Isobutyric acid is formed by isobutyraldehyde oxidation, which is a byproduct of propylene hydroformylation. High-pressure hydrocarboxylation (Koch reaction) of propylene can also be used to prepare it:

Isobutyric acid used as fungistat is unlikely to lead to endogenous levels of isobutyric acid in grain-consuming animals’ flesh, eggs, or milk. It can be used in the preparation of flavours and solvents, as well as in the processing of varnishes and plasticisers. Several routes are known, including alkaline hydrolysis of isobutyronitrile and potassium dichromate isobutanol oxidation in the presence of sulfuric acid. The action of sodium amalgam on methacrylic acid also results in isobutyric acid in the presence of proton donors. Isobutyric acid has a variety of essential derivatives that are actually used in industry for the manufacture of intermediates of isobutyronitrile and then converted to isobutylamidine hydrochloride, the raw material of the pesticide diazinone.

The acid behaves like a typical carboxylic acid: it can form derivatives of amide, ester, anhydride, and chloride. A higher yield can also be obtained by the oxidation of 2-methyl-1-nitropropane for the preparation of isobutyric acid. Azeotropic distillation with water can be used to purify isobutyric acid, and anhydrous isobutyric acid can be obtained from carbon tetrachloride by extractive distillation. This acid is metabolized into propionic acid, which is then converted into succinic acid and glucose and glycogen, respectively. With the catalysis of hydrofluoric acid to produce methyl isobutyrate and propyl isobutyrate, propylene and formic acid ester can react at 50 °C. Aluminum and other metals are corroded by isobutyric acid. An FAO (Food and Agriculture Organization) and WHO (World Health Organization) panel reviewed the safety of the compound as a food additive, concluding that there were no questions about the likely rate of intake. The inhibitory effects of isobutyric acid on the synthetic dipeptide activity of pepsin, n-carbobenzoxy-L-glutamyl-L-tyrosine, were examined in order to obtain evidence for the hypothesis that pepsin forms a hydrophobic bond with the nonpolar side chain or its substrates. In enclosed spaces where this response has taken place, flammable hydrogen gas can accumulate.