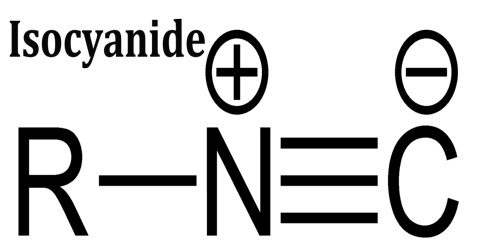 Isocyanide is an organic compound that contains a carbon-nitrogen triple bond, with an alkyl or aryl group connected to the nitrogen as well. It is also also called Isonitrile or Carbylamin. The organic fragment is connected to the isocyanide group via the nitrogen atom, not via the carbon. They are used as building blocks for the synthesis of other compounds. The isocyanides are isomers of the nitriles; they were discovered in 1867 but have never achieved any large-scale utility. They are usually prepared from primary amines by treatment with chloroform and alkali and often are obtained as minor products in the synthesis of nitriles from metal cyanides and organic halogen compounds. They possess remarkably powerful and repulsive odours.

Only few naturally occurring compounds exhibit the isocyanide functionality. The first was discovered in 1957 in an extract of the mold Penicillium notatum Westling. The compound xanthocillin later was used as an antibiotic. Since then numerous other isocyanides have been isolated.

Structure and Properties of Isocyanide

Isocyanides can be described by two resonance structures, one with a triple bond between the carbon and nitrogen and one with a carbon-nitrogen double bond. Surprisingly, the second one, with a carbenic character is the more important. Nevertheless, the π lone pair of the nitrogen, responsible of the zwitterionic structure, stabilizes the structure and is responsible of the linearity of isocyanides. Isocyanides are best shown as a mixture of both resonance structures. They are susceptible to polymerization. One of the most common methods of making an isocyanide is by the dehydration of an organic formamide. In this reaction, a dehydrating agent is needed and things like phosphoryl chloride, phosgene, and diphosgene have all shown to be effective in triggering the transformation. Another method that’s popular for making isocyanides is from primary amines, also called the Hofmann isocyanide synthesis. Isocyanides are stable to strong base they are often made under strongly basic conditions, but they are sensitive to acid. Isocyanides participate in many multicomponent reactions of interest in organic synthesis, two of which are: the Ugi reaction and the Passerini reaction.

Isocyanides can be reduced to their corresponding amines in the presence of lithium aluminum hydride (LiAlH4, a strong reducing agent). Isocyanides have also been shown to be a useful reagent in palladium catalysed reactions with a wide variety of compounds being formed using this method.