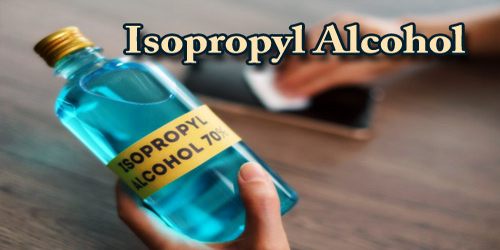 Isopropyl alcohol (IUPAC name propan-2-ol; commonly called isopropanol or 2-propanol) is a colorless and flammable liquid with the formula C3H8O. It is one of the most common members of the alcohol family of organic compounds.

Isopropyl alcohol was the first commercial synthetic alcohol; chemists at the Standard Oil Company of New Jersey (later Exxon Mobil) first produced it in 1920 while studying petroleum by-products. It is easily synthesized from the reaction of propylene with sulfuric acid, followed by hydrolysis. It is used in the manufacture of a wide variety of industrial and household chemicals and is a common ingredient in chemicals such as antiseptics, disinfectants, and detergents.

Propylene on esterification in the presence of sulfuric acid undergoes hydrolysis to form isopropyl alcohol. The reaction is as follows.

Isopropyl alcohol is also known as 2-propanol, sec-propyl alcohol, IPA, or isopropanol. IUPAC considers isopropanol an incorrect name as the hydrocarbon isopropane does not exist.

Isopropyl alcohol is mixed with water for use as a rubbing-alcohol antiseptic. It is also used in aftershave lotions, hand lotions, and other cosmetics. In industry, it is used as an inexpensive solvent for cosmetics, drugs, shellacs, and gums, as well as for denaturing ethanol (ethyl alcohol). Added to wet gas, it helps to prevent separation and freezing of a water layer. Isopropyl alcohol is easily oxidized to acetone, another important solvent.

Isopropyl alcohol reacts in a complex way with bromine giving mainly brominated acetones such as BrCH2COCBr3 and isopropyl bromide.

Isopropyl alcohol is the main ingredient in rubbing alcohol. It can decompose into acetone and hydrogen gas according to the following reaction.

Isopropyl alcohol forms an azeotrope with water, which gives a boiling point of 80.37 °C (176.67 °F) and a composition of 87.7 wt% (91 vol%) isopropyl alcohol. Water-isopropyl alcohol mixtures have depressed melting points. It has a slightly bitter taste and is not safe to drink. Isopropyl alcohol becomes increasingly viscous with decreasing temperature and freezes at −89 °C (−128 °F). It has a maximum absorbance at 205 nm in an ultraviolet-visible spectrum.

Isopropyl alcohol is combined with water to be used as an antiseptic rubbing-alcohol. This is also used in aftershave lotions, lotions on hands and other cosmetics. This is used in industry as a cheap solvent for cosmetics, medicines, shellacs, and gums, as well as for the denaturation of ethanol (ethyl alcohol). Most commonly used as a disinfectant for wiping down the surfaces of furniture and shelves in the operating room. It is effective against HBV viruses and is, therefore, used to clean blood or body fluids from the surface of equipment or furniture in the operating room. Unlike other alcohols isopropyl alcohol leads to the formation of alcoxides that can be called isopropoxides with active metals such as potassium.

In 1920, Standard Oil first produced isopropyl alcohol by hydrating propene. Its major use at the time was not rubbing alcohol but for oxidation to acetone, whose first major use was in World War I for the preparation of cordite, a smokeless, low explosive propellant. In 1994, 1.5 million tonnes of isopropyl alcohol was produced in the United States, Europe, and Japan.

Isopropyl alcohol also greatly irritates the digestive tract. Drinking a lot of this in the stomach and intestines can cause vomiting, diarrhea, pain, and bleeding. It can lead to low blood pressure, fatigue, shock, and coma. Rubbing alcohol when inhaled can also be harmful. It is composed of propylene gas. It is similar to synthetic ethyl alcohol, and if ingested, is poisonous. We will find it listed on windshield washer ingredients and nail polish removers. Rubbing alcohol is mixed with water by isopropyl alcohol. Isopropyl alcohol vapor is denser than air and is flammable, with a flammability range of between 2 and 12.7% in air. It should be kept away from heat and open flame. Distillation of isopropyl alcohol over magnesium has been reported to form peroxides, which may explode upon concentration. Isopropyl alcohol is a skin irritant. Wearing protective gloves is recommended.