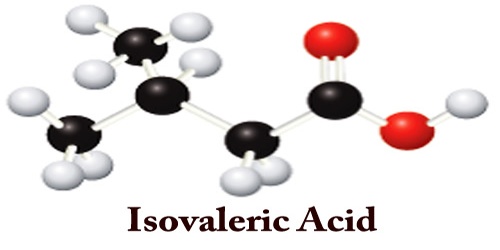 Isovaleric acid (C5H10O2), also known as β-methylbutyric acid or more commonly 3-Methylbutanoic acid is an organic compound with the formula (CH3)2CHCH2CO2H. It is a natural fatty acid found in a wide variety of plants and essential oils. Isovaleric acid is a clear colorless liquid that is sparingly soluble in water, but well soluble in most common organic solvents. This acid can be found in many common house items, such as cheese, soy milk, and apple juice. The compound occurs naturally.

Isovaleric acid has a characteristic disagreeable, rancid, cheese-like odor. It is extremely penetrating and persistent with a sour taste. May consist of one or a mixture of isomers or n-pentanoic acid and/or 2- or 3-methyl butanoic acid. Consumption: Annual: 1850.00 lb.

Isovaleric acid has a strong pungent cheesy or sweaty smell, and its volatile esters are widely used in perfumery. It has been proposed that it is the anticonvulsant agent in valerian. It is a major component of the cause of intense foot odor, as it is produced by skin bacteria metabolizing leucine.

It has been suggested that isovaleric acid from pilot whales, a species frequently consumed in the Faroe Islands, maybe the unusual dietary factor in prolonged gestation in the population of the Faroe Islands. Previous studies suggested that was due to the high intake of n-3 polyunsaturated fatty acids has been, but fatty acid data for eicosapentaenoic acid (EPA) and docosahexanoic acid (DHA) in blood lipids of Faroese and Norwegians was reviewed in terms of the type of fish eaten (mostly lean white fish with DHA much greater than EPA); the popular lean fish, thus, probably provides too little EPA to produce a marked effect on human biochemistry. Isovaleric acid is found to be associated with isovaleric acidemia, which is an inborn error of metabolism.

Isovaleric acid is an intermediate in leucine metabolism. High blood concentrations of isovaleric acid occur in patients with the clinical disorder “isovaleric acidemia.” This is a genetic defect of leucine metabolism in which the enzyme isovaleryl-coenzyme A dehydrogenase is inhibited or absent. The disease is characterized by episodic acidosis, slight mental retardation, and an unpleasant body odor.

Isovaleric acid is seen as the primary cause of the flavors added to the wine caused by Brettanomyces yeasts. Other compounds produced by Brettanomyces yeasts include 4-ethylphenol, 4-vinylphenol, and 4-ethylguaiacol. An excess of isovaleric acid in wine is generally seen as a defect, as it can smell sweaty, leathery, or like a barnyard, but in small amounts, it can smell smokey, spicy, or medicinal.

Isovaleric acid is used extensively as a flavoring ingredient in nonalcoholic beverages and in foods such as ice cream, candy, baked goods, and cheese, as a fragrance ingredient in perfumes, and as a chemical intermediate in the manufacture of sedatives and other pharmaceutical products. It is also used as an extractant of mercaptans from petroleum hydrocarbons, a vinyl stabilizer, and as an intermediate in the manufacture of plasticizers and synthetic lubricants.

Contact with molten substances may cause severe burns to skin and eyes. Avoid any skin contact. The effects of contact or inhalation may be delayed. Fire may produce irritating, corrosive and/or toxic gases. Runoff from fire control or dilution water may be corrosive and/or toxic and cause pollution. When heated, vapors may form explosive mixtures with air: indoors, outdoors, and sewers explosion hazards. Those substances designated with a (P) may polymerize explosively when heated or involved in a fire. Contact with metals may evolve flammable hydrogen gas. Containers may explode when heated. Runoff may pollute waterways. The substance may be transported in a molten form.

Isovaleric acid can also be found in beer, and, excepting some English–style ales, is usually considered a flaw. It can be produced by the oxidation of hop resins, or by Brettanomyces yeasts present.