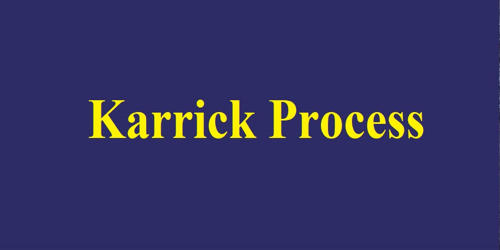 Although primarily meant for coal carbonization, it also could be used for processing of oil shale, lignite, or any carbonaceous materials. After treatment by the Karrick process, a ton of coal will yield up to a barrel of oil, 3000 cu. ft. of rich fuel gas, and 1500 lb. of solid smokeless char (semi-coke). These are heated at 450 °C (800 °F) to 700 °C (1,300 °F) in the absence of air to distill out synthetic fuels–unconventional oil and syngas. It could be used for coal liquefaction as also for a semi-coke production. The process was the work of oil shale technologist, Lewis Cass Karrick, at the United States Bureau of Mines in the 1920s. 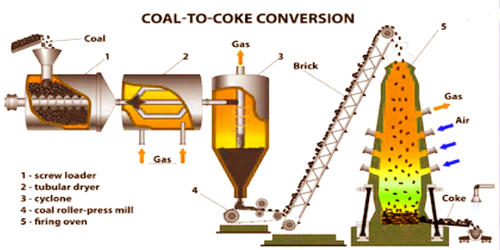 The Karrick process is a low-temperature carbonization process, which uses a hermetic retort. For commercial-scale production, a retort about 3 feet (0.91 m) in diameter and 20 feet (6.1 m) high would be used. The process of carbonization would last about 3 hours. It yields more heat than raw coal, and it can be converted to water gas. That gas can be converted to oil by the Fischer-Tropsch synthesis-process.

Superheated steam is injected continuously into the top of a retort filled by coal. At first, in contact with cool coal, the steam condenses to water acting as a cleaning agent. While the temperature of coal rises, the destructive distillation starts. Coal is heated at 450 °C (800 °F) to 700 °C (1,300 °F) in the absence of air. The carbonization temperature is lower compared with 800 °C (1,500 °F) to 1,000 °C (1,800 °F) for producing metallurgic coke. As soon as Karrick and his associates proved they could produce oil from coal cheaper than the oil wells could pump it, the government stopped all work on the processes at the pilot plants in Rifle, Colorado, and dismantled them.

The resulting water, oil, and coal tar, and syngas move out from retort through outlet valves at the bottom of the retort. The residue (char or semi-coke) remains in the retort. While the produced liquids are mostly a by-product, the semi-coke is the main product, a solid and smokeless fuel.