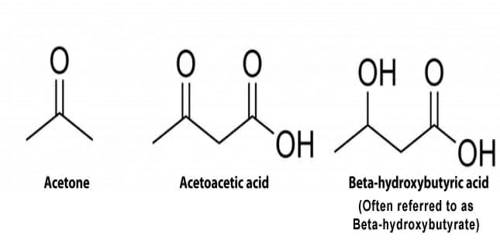 Ketone bodies are the water-soluble molecules containing the ketone group that is produced by the liver from fatty acids during periods of low food intake (fasting), carbohydrate restrictive diets, starvation, prolonged intense exercise, alcoholism, or in untreated (or inadequately treated) type 1 diabetes mellitus. These chemicals that the body makes when there is not enough insulin in the blood and it must break down fat instead of the sugar glucose for energy. There are three ketone bodies produced by the liver. They are acetoacetate, beta-hydroxybutyrate, and acetone.

Ketone bodies are readily transported into tissues outside the liver and converted into acetyl-CoA, which then enters the citric acid cycle and is oxidized in the mitochondria for energy. They are substances produced by the liver during gluconeogenesis, a process that creates glucose in times of fasting and starvation. In the brain, ketone bodies are also used to make acetyl-CoA into long-chain fatty acids.

Ketone bodies are produced by the liver under the circumstances listed above, resultant of intense gluconeogenesis, which is the production of glucose from non-carbohydrate sources. They build up in the blood and then spill over into the urine. They are therefore always released into the blood by the liver together with newly produced glucose after the liver glycogen stores have been depleted. The body can also rid itself of acetone through the lungs. This gives the breath a fruity odor. Ketones can be detected and monitored in your urine at home using products such as Ketostix, Chemstrips, and Acetest.

Ketone body metabolism serves an essential metabolic role in the development of the neonate. When two acetyl-CoA molecules lose their -CoAs (or coenzyme A groups), they can form a (covalent) dimer called acetoacetate. β-hydroxybutyrate is a reduced form of acetoacetate, in which the ketone group is converted into an alcohol (or hydroxyl) group. Both are 4-carbon molecules that can readily be converted back into acetyl-CoA by most tissues of the body, with the notable exception of the liver. These compounds are used in healthy individuals to provide energy to the cells of the body when glucose is low or absent in the diet. Acetone is the decarboxylated form of acetoacetate which cannot be converted back into acetyl-CoA except via detoxification in the liver where it is converted into lactic acid, which can, in turn, be oxidized into pyruvic acid, and only then into acetyl-CoA.

Ketone bodies have a characteristic smell, which can easily be detected in the breath of persons in ketosis and ketoacidosis. It is a normal balanced diet that provides sufficient nutrient content to satisfy the glucose requirements of the brain and other tissues. It is often described as fruity or like nail polish remover (which usually contains acetone or ethyl acetate).