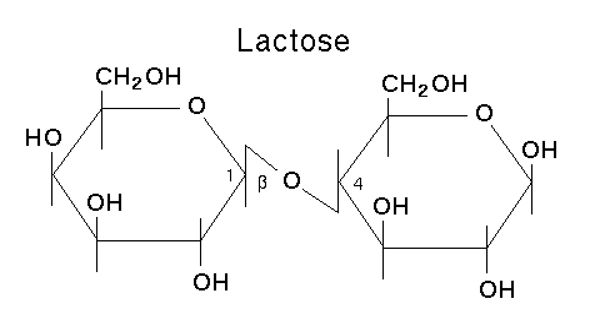 Lactose is a disaccharide that consists of galactose and glucose molecules. It is a sugar present in milk. In order for lactose to be absorbed from the intestine and into the body, it must first be split into glucose and galactose.

Lactose makes up around 2-8% of the solids in milk. It is a disaccharide sugar, that is present in milk and yields glucose and galactose upon hydrolysis and yields especially lactic acid upon fermentation.

It is a disaccharide containing glucose and galactose units. The glucose and galactose are then absorbed by the cells lining the small intestine. It is the specific sugar of the milk and, with starch and sucrose, it is one of the three most common carbohydrates taken up with diet. Carbohydratess are a major class of biomolecules that can be classified based on the saccharide constituents.

The name comes from the Latin word for milk, plus the -ose ending used to name sugars. The enzyme that splits lactose into glucose and galactose is called lactase, and it is located on the surface of the cells lining the small intestine.

Lactose is found in milk products. It composes about 2–8% of milk by weight. Several million tons are produced annually as a by-product of the dairy industry. Dairy products such as milk yogurt and cheese contain very little lactose. Lactase is used as the bacteria used to make them consume lactose during the manufacturing process. It is less soluble than other disaccharides and has a sweetness equal to 16% of sucrose’s. Its fermentation to lactic acid by bacteria is responsible for the souring of milk.

Infant mammals are fed on by milk from their mothers.

To digest it an enzyme called lactase cleaves the lactose into its two subunits glucose and galactose for absorption. It is a white, crystalline, sweet, water-soluble commercial form of this compound, obtained from whey and used in infant feedings, in confections and other foods, in bacteriological media, and in pharmacology as a diluent and excipient.

Lactose is not fermented by most yeast during brewing, which may be used to advantage.[9] For example, lactose may be used to sweeten stout beer; the resulting beer is usually called a milk stout or a cream stout.

The reaction that cleaves the sugar of the milk into its monosaccharides, galactose and glucose (β-(1→4)-glycosidic reaction), is catalyzed by an enzyme called lactase localized on the brush border membranes of enterocytes.