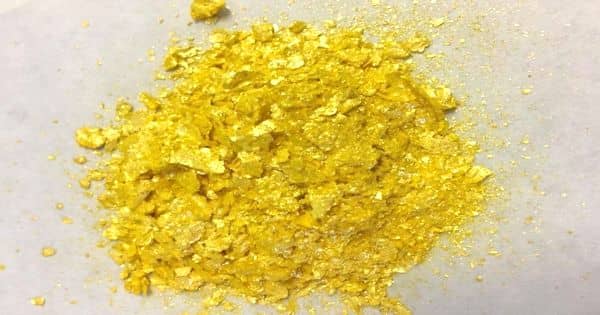 Lead(II) iodide or lead iodide is a salt with the formula PbI2. It appears as a yellow crystalline solid. At room temperature, it is a bright yellow odorless crystalline solid, that becomes orange and red when heated. It is insoluble in water and denser than water. It was formerly called plumbous iodide.

It is a very rarely used compound semiconductor, which appears bright yellow at room temperature. The compound currently has a few specialized applications, such as the manufacture of solar cells and X-ray and gamma-ray detectors. It is promising as a high-efficiency solid-state detector; however early devices were limited by material imperfections and impurities.

Lead iodide is a crystalline solid, odorless, and yellow in color. It is decomposed by light at moderately high temperatures and this effect has been used in a patented photographic process. It is soluble in boiling water and potassium iodide. It is insoluble in water and denser when compared to water.

PbI2 is commonly synthesized via a precipitation reaction between potassium iodide KI and lead(II) nitrate Pb(NO3)2 in water solution:

The compound can also be synthesized by reacting iodine vapor with molten lead between 500 and 700°C.

A thin film of PbI2 can also be prepared by depositing a film of lead sulfide PbS and exposing it to iodine vapor, by the reaction

The sulfur is then washed with dimethyl sulfoxide.

The applications of lead iodide are in printing, bronzing, mosaic gold and photography. It is also used as a detector for high-energy photons such as X- rays and gamma rays.

Lead iodide was formerly employed as a yellow pigment in some paints, with the name iodide yellow. However, that use has been largely discontinued due to its toxicity and poor stability.

Lead iodide is very toxic to human health. Ingesting large amounts of this compound results in irritation of the alimentary tract. Ingestion will cause many acute and chronic consequences characteristic of lead poisoning.  It is non-combustible and when heated to decompose it produce toxic and corrosive fumes. Lead iodide is an inhalation hazard, appropriate respirator should be used when handling powders of lead iodide.