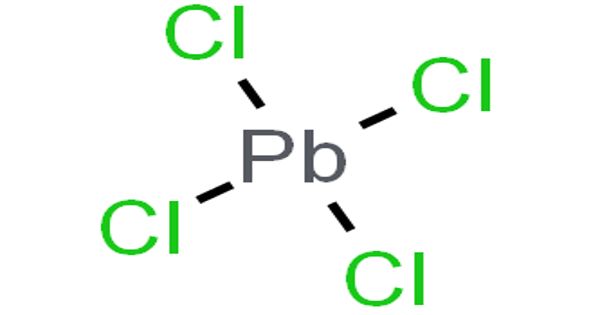 Lead (IV) Chloride is a yellow, oily liquid or powder. Insoluble in cold water; soluble in hot water. It is also known as Lead tetrachloride, has the molecular formula PbCl4. It is a yellow, oily liquid that is stable below 0°C, and decomposes at 50 °C. It is one of the earliest materials to be used as a semiconductor as it tends to crystallize in sodium chloride. It has a tetrahedral configuration, with lead as the central atom. The Pb–Cl covalent bonds have been measured to be 247 pm and the bond energy is 243 kJ⋅mol-1.

Lead (IV) Chloride is one of the earliest materials to be used as a semiconductor as it tends to crystallize in sodium chloride. It is a selective oxidizing agent causing oxidative cleavage of polyhydroxy compounds. 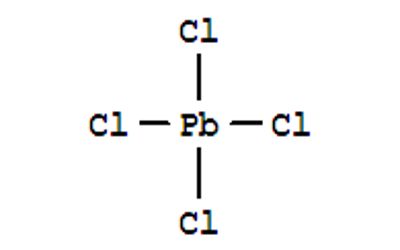 The reaction of lead(IV) chloride with water is just like the silicon tetrachloride one. Unlike carbon tetrachloride, another group IV (IUPAC: group 14) chloride, lead tetrachloride reacts with water. This is because the central atom is bigger (Pb is bigger than C) so there is less cluttering and water can easily access it. You will get lead(IV) oxide produced as a brown solid and fumes of hydrogen chloride given off. The overall reaction is thus as follow:

The preferred preparation method is to introduce chlorine into the solution while dissolving lead dioxide in cold concentrated HCl. Lead tetrachloride tends to decompose further into lead dichloride and chlorine gas:

Lead (IV) Chloride is a selective oxidizing agent causing oxidative cleavage of polyhydroxy compounds. There are reports that this reaction can proceed explosively and that the compound is best stored under pure sulfuric acid at -80°C in the dark. It cleaves compounds that have hydroxyl groups on adjacent carbon atoms, breaking the carbon-carbon bonds to form carbonyl compounds, such as aldehydes, ketones, or acids.

The stability of the +4 oxidation state decreases as we travel down this group of the periodic table. Acetic anhydride converts the water formed in the reaction into acetic acid, thus preventing hydrolysis of the product lead tetraacetate. Thus while carbon tetrachloride is a stable compound, with lead the oxidation state +2 is favored and PbCl4 quickly becomes PbCl2.

Lead is a cumulative poison. Lead can be absorbed by the body through several routes, primarily inhalation but also ingestion and dermal contact. Lead compounds are also teratogens. Lead (IV) Chloride may be kept under cold concentrated sulfuric acid, but when heated with it, it decomposes with the explosion into lead dichloride and chlorine.