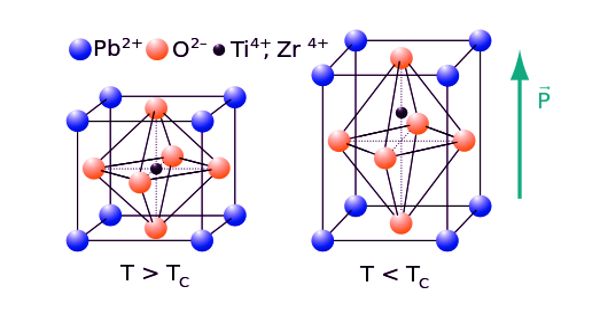 Lead zirconate titanate (PZT) is the most common piezoelectric ceramic and exhibits excellent properties as is well known. It is an inorganic compound with the chemical formula Pb[ZrxTi1−x]O3 (0≤x≤1). Also called lead zirconium titanate, it is a ceramic perovskite material that shows a marked piezoelectric effect, meaning that the compound changes shape when an electric field is applied. It is widely used as piezoelectric materials. The process of manufacturing PZT powders consists of six distinct unit operations. High-purity raw materials are evaluated, selected, and sourced throughout the world. Selection criteria, in addition to purity, include material activity and limits on specific deleterious impurities.

Lead Zirconate Titanate is a piezoelectric ceramic material with a crystalline, perovskite structure used commonly for applications that require high temperatures and sensitivity.

Lead zirconate titanates (PZT) exhibit a variety of important functional properties (depending on the zirconium-to-titanium ratio and dopant concentration) that make them suitable for piezoelectric and electro-optical applications. It is used in a number of practical applications such as ultrasonic transducers and piezoelectric resonators. These ceramics have been widely used for a sensor and actuator due to their strong piezoelectric property. It is a white to off-white solid.

PZT is formed under extremely high temperatures. The particulates are filtered out using a mechanical filter. Due to its physical strength, chemical inertness, tailorability, and relatively low manufacture costs, it is one of the most commonly used piezo ceramics. PZT causes a compound to change shape from an electric field.

PZT is used to make ultrasound transducers both for loudspeakers and microphones and other sensors and actuators, as well as high-value ceramic capacitors and FRAM chips. PZT is also used in the manufacture of ceramic resonators for reference timing in electronic circuitry.