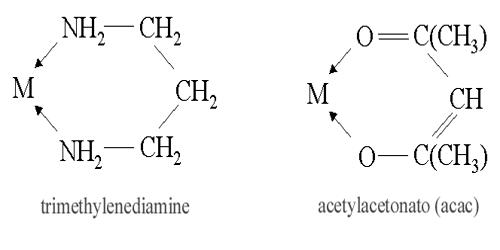 The neutral molecules or ions (or atoms or group of atoms) which are directly attached to the central metal ion or atom through co-ordinate bonds in the complex ion are called ligand or ligands. Ligand isomerism is a type of structural isomerism that arises from the presence of ligands which can adopt different isomeric forms. Ligands are usually thought of as electron donors attracted to the metal at the center of the complex. An example is provided by diamino propane, which may have or surely have amine groups in terminal(1,3)positions or in the 1,2 positions.

Any species capable of donating a pair of electrons to metal is called a ligand. A ligand may be an ion, negatively or positively charged, or a neutral molecule. Ligands may be neutral or negatively charged species with electron pairs available. The position isomer of ligand gives ligand isomerism. This isomerism is a special type of isomerism. Isomeric coordination compounds are known in which the overall isomerism results from isomerism solely within the ligand groups. Coordination isomerism is a form of structural isomerism in which the composition of the complex ion varies. In a coordination isomer, the total ratio of ligand to metal remains the same, but the ligands attached to a specific metal ion change. Coordination isomers are coordination salts in which there is an interchange of ligands between the metal in the cation and the metal in the anion. Ionization isomers can be thought of as occurring because of the formation of different ions in solution.

Linkage isomers are coordination compounds that have the same composition but differ in the connectivity of the ligand to the metal. For example, a thiocyanato group could be connected to the metal atom by either the S atom or the N atom.

Typical ligands that give rise to linkage isomers are:

There are a few requirements for an atom or a group of atoms or ions to behave as a ligand. These are: